Shadow Defender, first developed in 2007, is a simple tool for allowing you to revert anything and everything on your computer back to a previous state. Say you’re thinking of running some untrusted .exe file or you’re giving your computer to someone who you’re afraid will muck it up. With Shadow Defender, you can save your computers current state and then run it in a virtual environment called “Shadow Mode,” and then the next time you reboot the computer, it’ll be back to its original state. That allows you to do whatever you want in Shadow Mode, safe in the knowledge that if something goes badly wrong on your computer, it can be undone.

Shadow Defender markets itself as a solution to viruses and malware, but to be clear, it is not a virus scanner. Rather, as described above, it is simply a piece of software that allows you to revert changes on your computer.

A rundown of Shadow Defender

The current version of Shadow Defender at the time of writing, 1.5.0.726, is only 3.54MB in size, and very easy to install on the official website (shadowdefender.com). Once you’ve installed it, here’s what the software looks like: 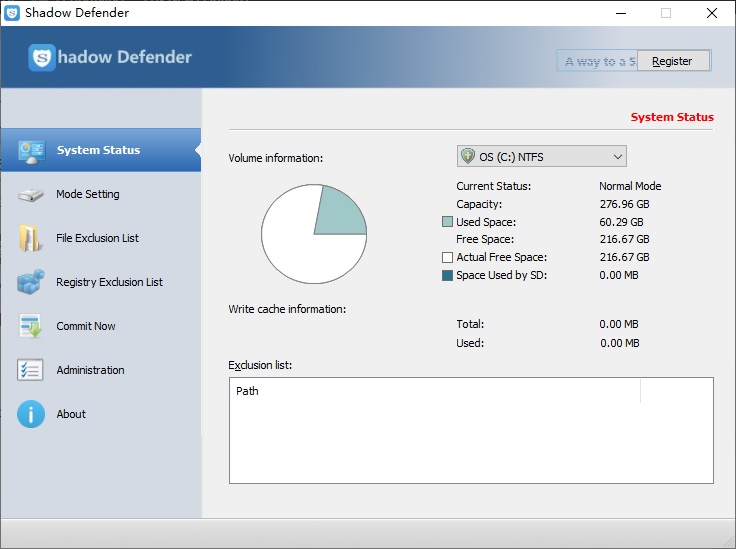 Displays what mode your computer is currently in (“Normal Mode” as above means I haven’t gone into “Shadow Mode,” so any changes I made here wouldn’t be able to be reverted) and free space, along with the currently Exclusion list (see the sections below for information on how you can set exclusions). 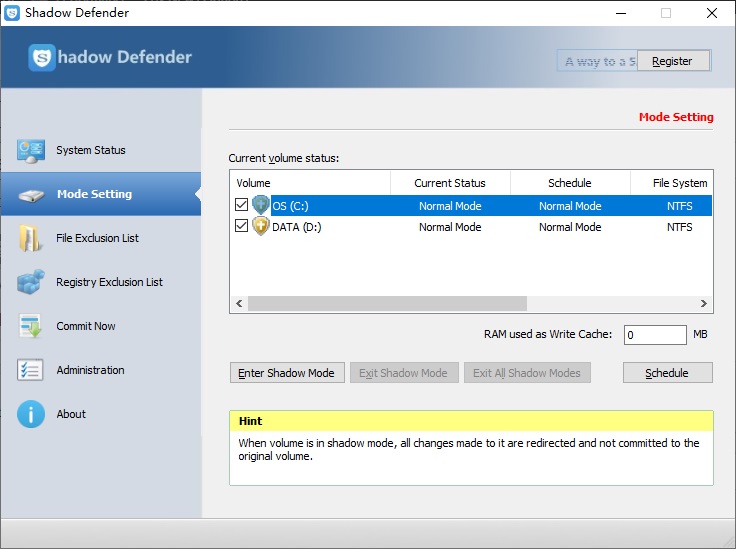 Here is where you actually put your computer into Shadow Mode. You can select a drive (such as the C: drive in the above screenshot), then click “Enter Shadow Mode”: 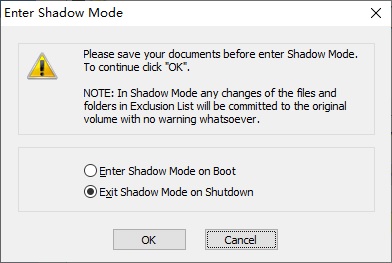 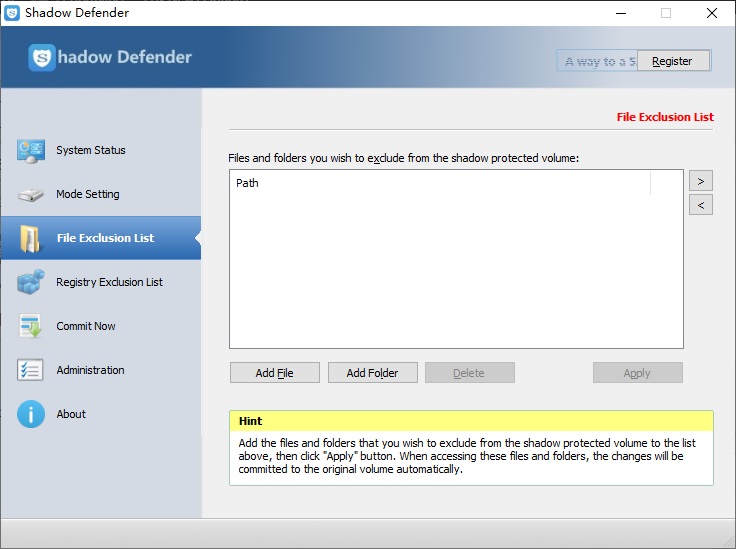 Files in the exclusion list, as the hint explains here, will not be protected when you go into Shadow Mode – i.e. changes made to them in Shadow Mode will also change them in your saved backup. Therefore, you should be careful with this. If you’re going into Shadow Mode to test something you think might be a virus and you add a file to be excluded, if that file gets corrupted, it’ll also be corrupted when you get out of Shadow Mode and restore your computer to its previous state. 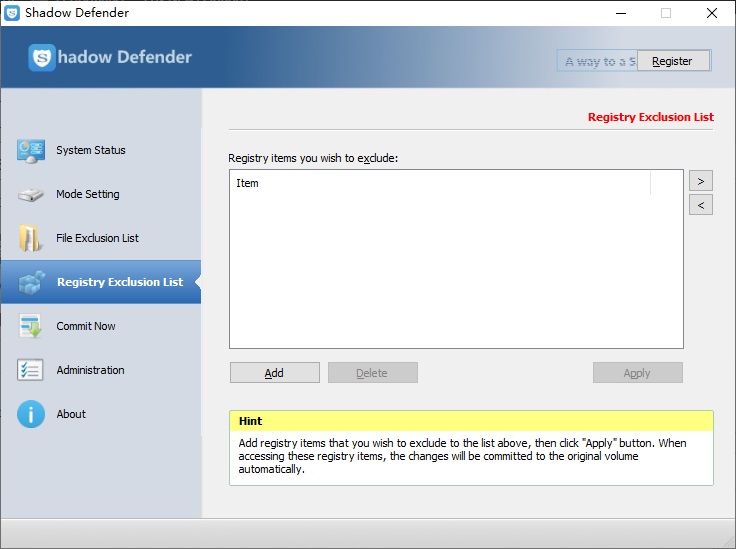 Same as the File Exclusion List as above, but for registry items. Again, be very careful about adding anything here, because changes made won’t be able to be reverted. The safest thing if you’re doing something risky is to add nothing to any exclusion list before going into Shadow Mode, and then you know that when you restore your computers previous state, everything will be 100% the same. 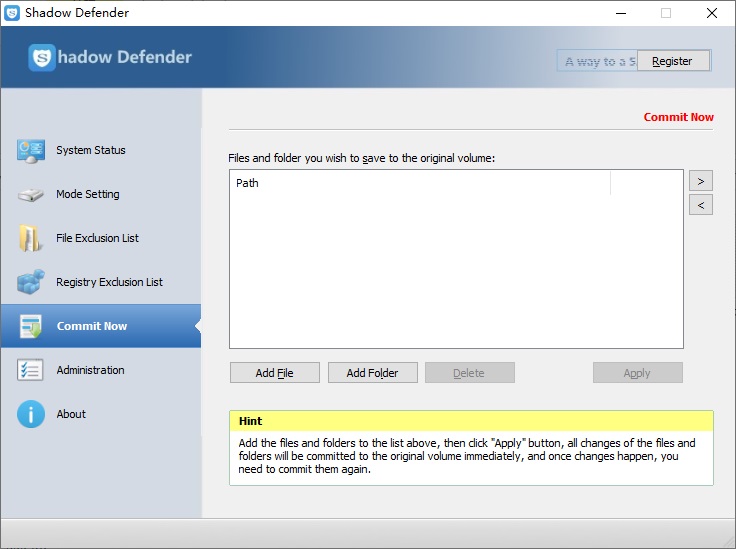 If you’re in Shadow Mode, here you can commit files or folders to the original backup that was taken when you entered Shadow Mode. You’d use this if you’ve made some important changes to some files while in Shadow Mode that you definitely want to save. 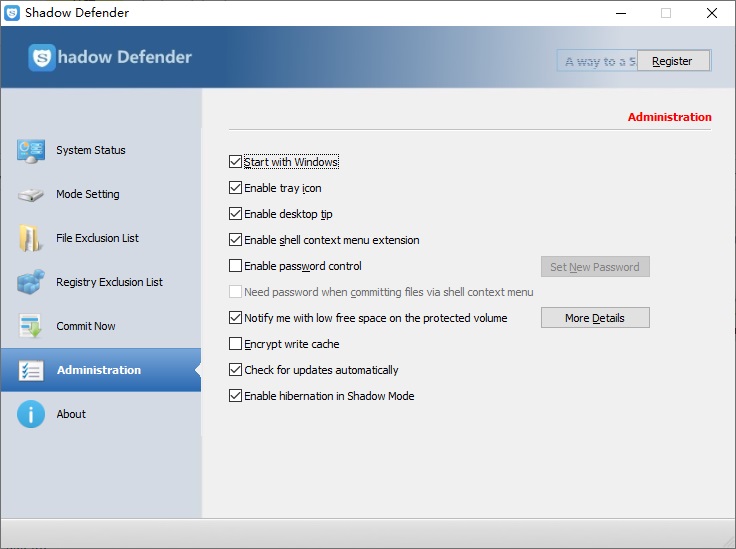 Are there any discount or coupon codes for Shadow Defender?

While Shadow Defender is a legitimate tool, it’s not the only product in this space. I’ve identified the following main competitors to Shadow Defender:

These are all legitimate and good products, like Shadow Defender. I’ve summarized the main differences between each of these and Shadow Defender as follows:

Shadow Defender vs Sandboxie: Sandboxie (sandboxie.com) is now open-source, and like Shadow Defender, has a good reputation. There are a few differences, but the main one is with Sandboxie you do not need to restart your computer to exit its virtual environment, unlike with Shadow Defender where you will have to reboot to get out of its Shadow Mode. This may be more convenient, but with Sandboxie there is the potential that some programs on your computer won’t work since it may not have access to all drivers and system files in its virtual environment.

Shadow Defender vs Deep Freeze: Deep Freeze is made by a company called Faronics, which also has a very good reputation and has been around for over 2 decades. Deep Freeze works similarly to Shadow Defender and you can expect it to work. However, its pricing is much worse than Shadow Defender, since (at the time of writing) it costs around $66 USD for a 3 year license. Shadow Defender only costs $39 USD for lifetime access, so I recommend Shadow Defender unless you’d really feel much more comfortable going with a larger and transparent company (it’s not even clear who actually makes Shadow Defender).

Shadow Defender vs Acronis True Image: Acronis is perhaps the biggest software company of all the one’s listed here. True Image is not a “pure” system restore tool as it also does antivirus scans, and it is also the most expensive of all tools here at €40 PER YEAR for its cheapest license. You don’t need to pay that much if all you’re looking for is a tool to allow you to revert changes.

The verdict on Shadow Defender

Shadow Defender worked as intended during my testing of it, and it has a reputation as a reliable piece of software. You can expect it to do exactly what it advertises. Also, as detailed above, it’s cheaper than most other system restore tools of this nature and appears to be the most reliable for a) allowing you to do everything in a virtual environment that you can do in your normal environment and b) saving 100% safe backups to be restored that can’t be modified by malicious software while you’re in its Shadow Mode. Therefore, I can strongly recommend it. You can purchase Shadow Defender through the latest page on the website here (our referral link).