Click here to visit the latest Hard Disk Sentinel website (2021) and use the coupon code HDSP-H1-GA79612 for 40% off the professional version.

Hard Disk Sentinel, first developed in 2012, is a tool for finding, testing, diagnosing and repairing Solid State Drive (SSD) and Hard Disk Drive (HDD) problems. If you suspect your SSD or HDD has issues or is not performing as intended and you’re not sure why, this is the kind of tool you’ll want to download.

A rundown of Hard Disk Sentinel

For this review, I’m testing the Windows version of Hard Disk Sentinel (version 5.61). This was super-easy to download from the official website (hdsentinel.com), being around 33MB and taking only a minute to install (the install process is completely standard). Here’s what it looks like on my laptop (click the image for the full size): 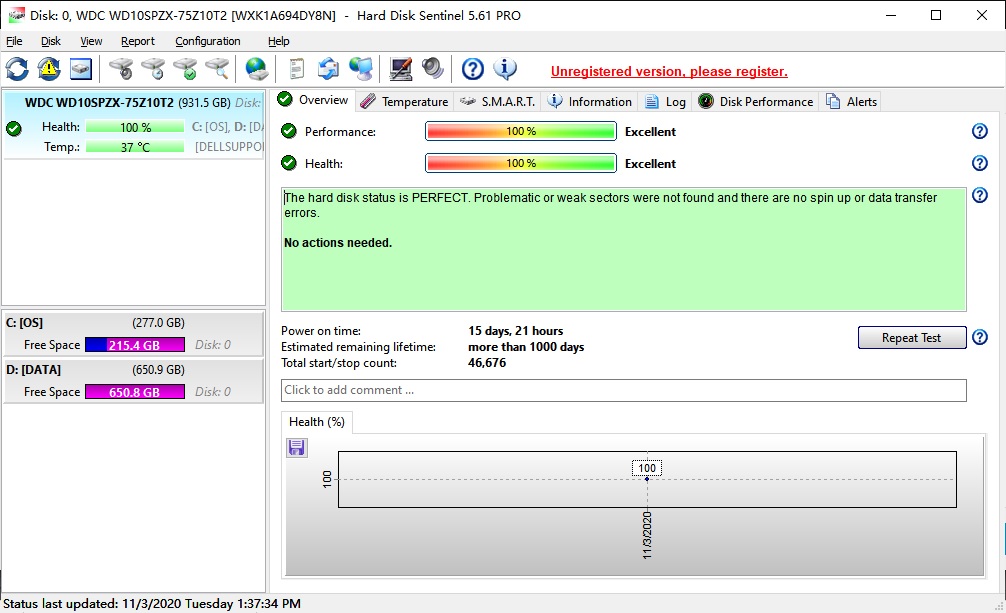 This laptop is only a few months old, so you can see I haven’t used much space on it, and Hard Disk Sentinel didn’t find any problems with it.

Beyond the main overview screen, you can also view the Temperature, S.M.A.R.T and Information screens: 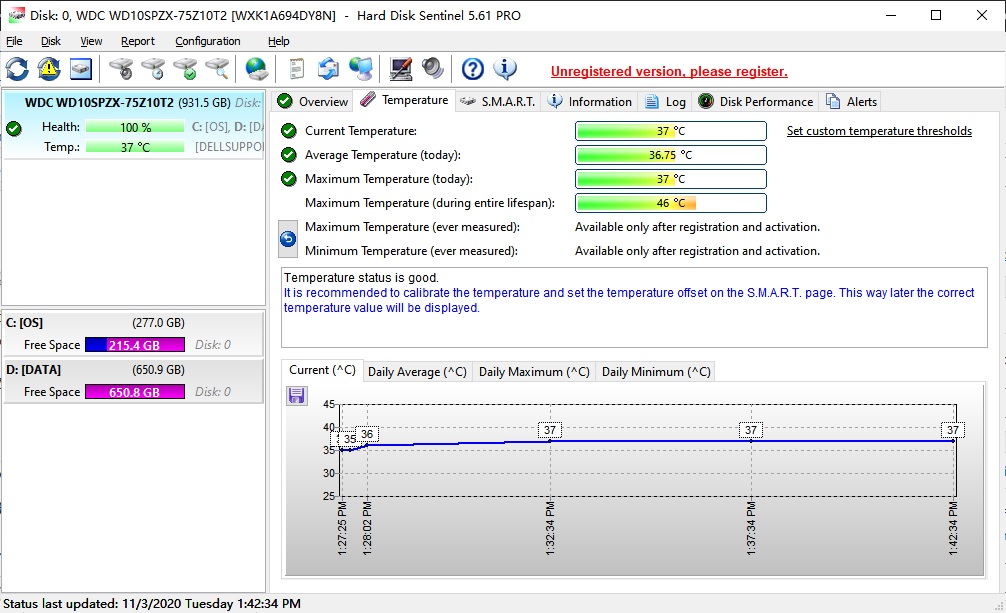 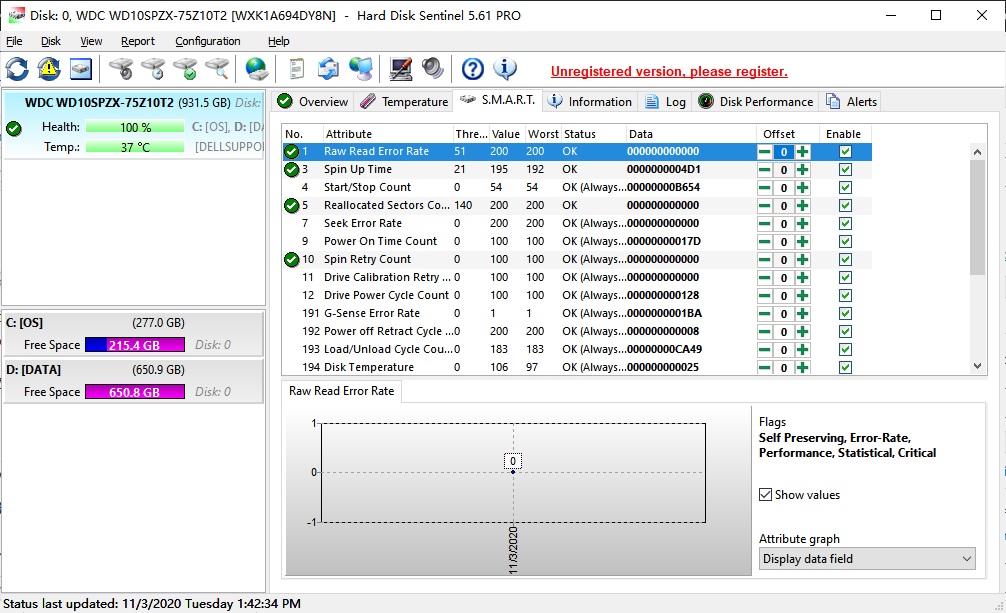 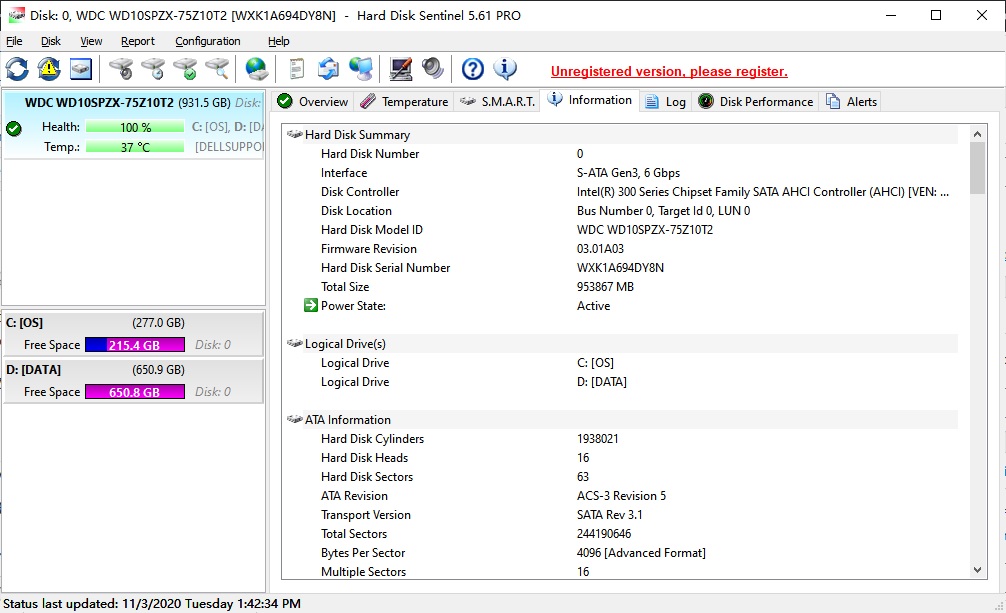 Once you’ve been using Hard Disk Sentinel for a while and it’s monitored your SSD or HDD for some time, you can also click the “Disk Performance” tab to view some information on the work that’s been done: 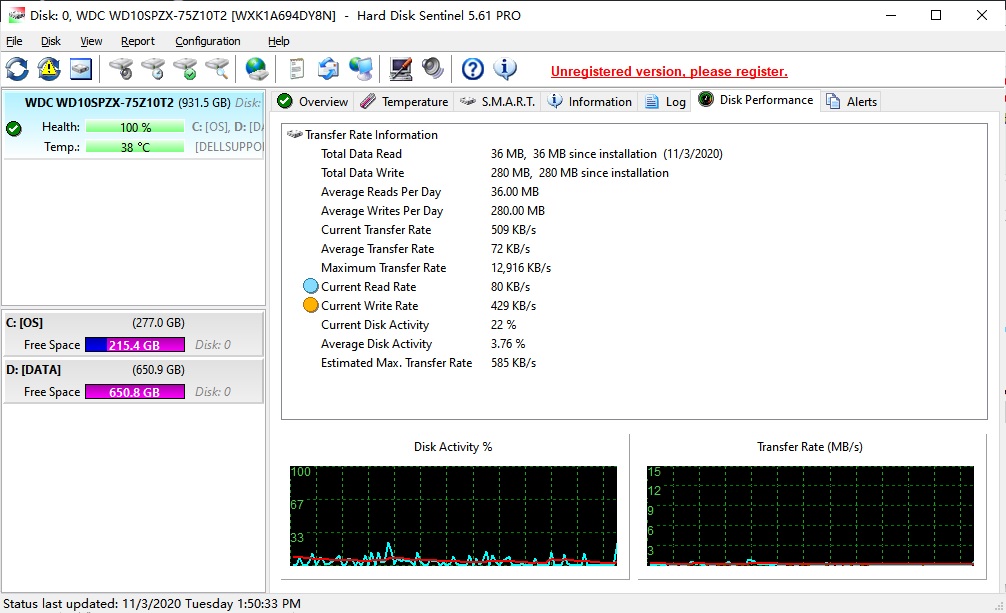 All of these screens are very comprehensive.

If you’re using the Professional version of Hard Disk Sentinel (not the portable one – the differences are explained below), you can setup Hard Disk Sentinel to alert you when your disk is having some abnormality, such as a temperature that’s too high: 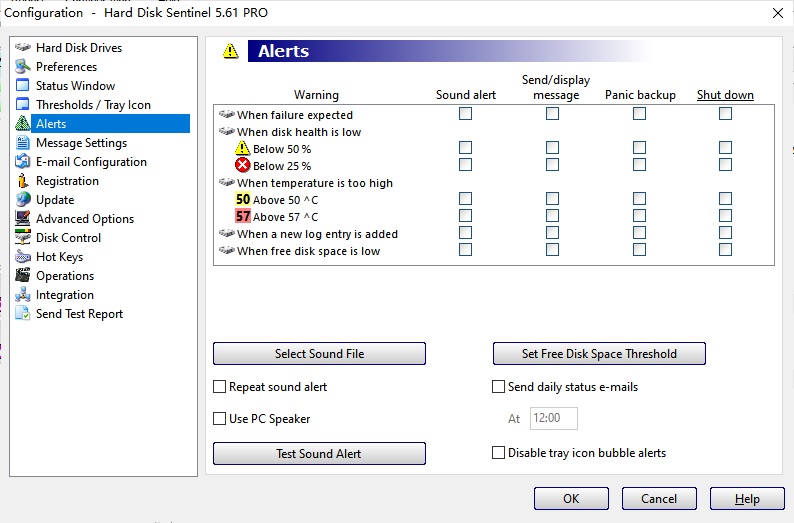 You can also run tests by going to, for example, Disk -> Short Self-test -> Selected disk only: 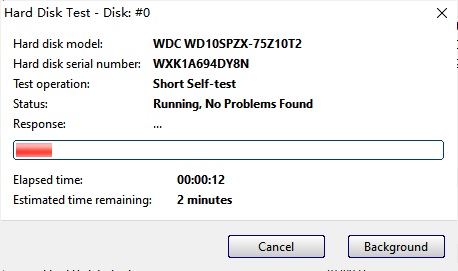 There are other features of Hard Disk Sentinel, but these are the main ones, and the above screenshots should give you a pretty good idea of how the software works.

What are the differences between different versions of Hard Disk Sentinel?

I have not had to contact the developers of Hard Disk Sentinel myself yet, so can’t comment with any real authority on how good their support is. However, I definitely expect they give competent support. There are also many resources on how to use Hard Disk Sentinel:

Is there a licence key or torrent available with Hard Disk Sentinel?

As always, we don’t condone trying to steal software, and strongly advise against trying to download an illegal version.

Are there any coupon codes for Hard Disk Sentinel?

What alternatives are there to Hard Disk Sentinel?

As I see it, the main alternatives to Hard Disk Sentinel would be the following:

Yes. While Hard Disk Sentinel has been around for a while, it’s constantly being updated and improved. If you visit their Facebook page, you can see the updates that are being released. Typically at least once a month or so they’ll come out with another update. They also have a revision history on the website, though this only lists major revisions, not minor updates as the Facebook page does.

I believe Hard Disk Sentinel is perfectly safe, and I haven’t heard of any cases of it corrupting a PC or anything of that nature.

Do I recommend Hard Disk Sentinel?

Hard Disk Sentinel is great software, and I can definitely recommend it. It’s been worked hard on for several years now and is clearly a very comprehensive and reliable piece of software for dealing with SSD and HDD issues.