Restoro is one of the most popular tools for fixing PC issues. In this review, I’ll test it personally and show how it works, as well as comment on whether I think it’s worth paying for and answer the common questions people have about it.

Click the download button on Restoro.com and open the setup wizard. It should not take more than a few minutes for it to install: 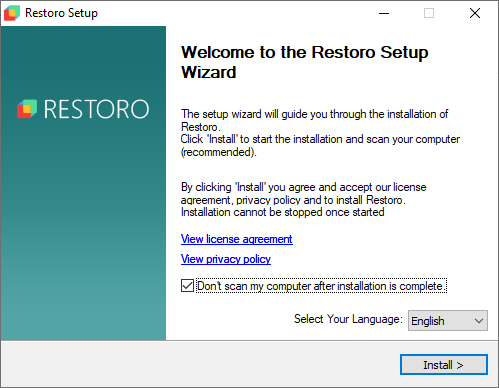 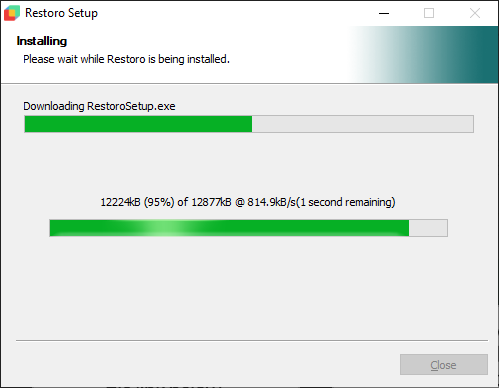 How does Restoro work?

Restoro will scan your PC for practically every possible issue it might have, including the following:

Restoro therefore markets itself as an “all-in-one” solution for PC issues.

I tried using Restoro on my own PC and took some shots of it working as listed below. From a user’s point of view, Restoro is extremely simple, and requires zero technical expertise (you just click the buttons and let it work). 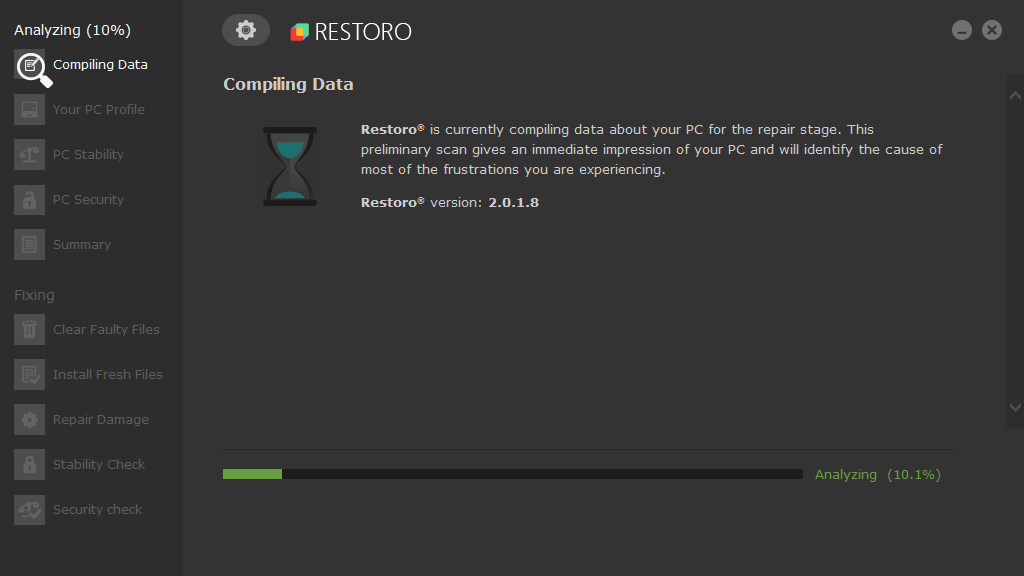 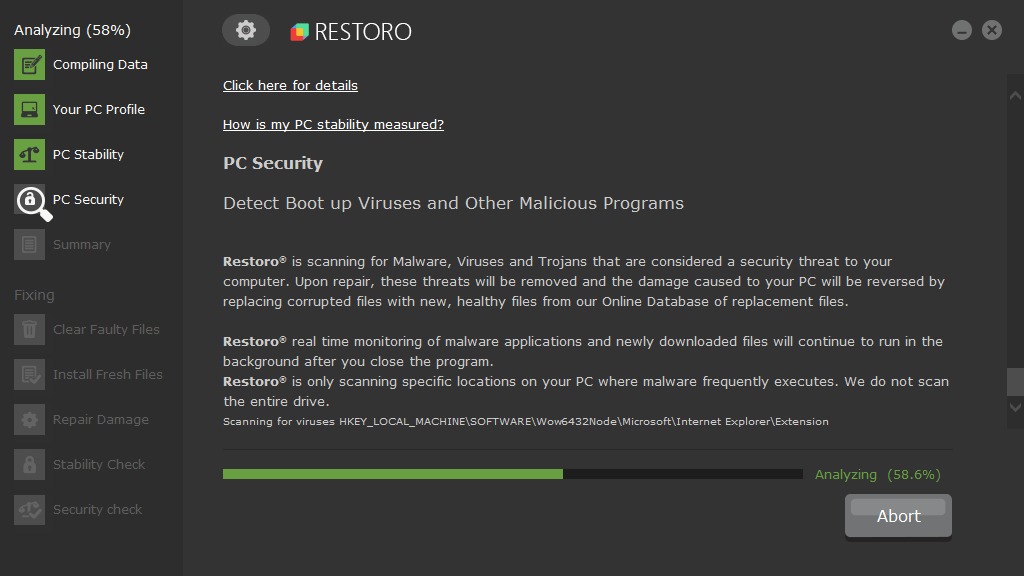 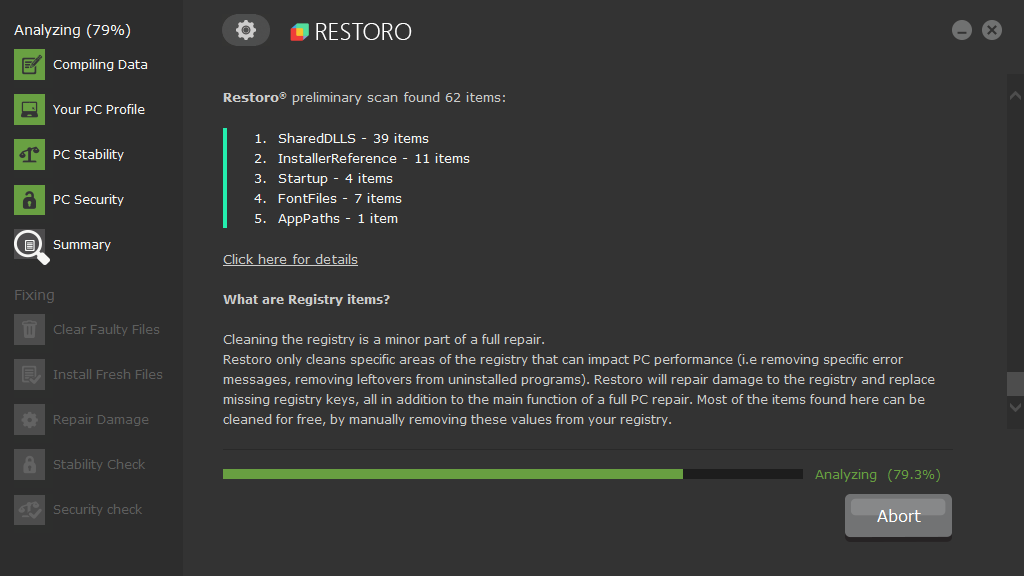 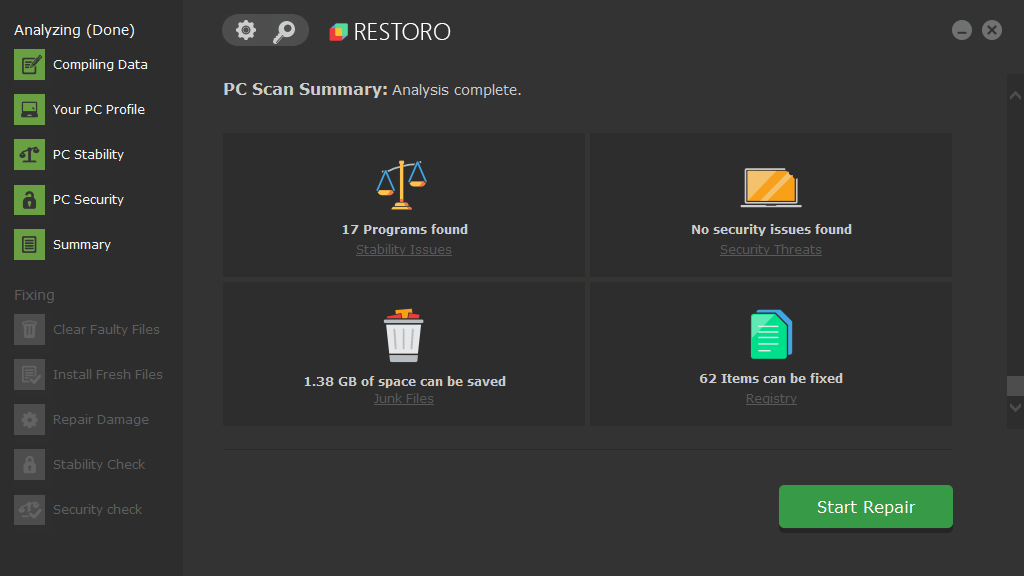 On my PC this only took a few minutes to complete. As you can see in the screenshot above, Restoro didn’t find any security issues on my PC, but found supposed stability issues, junk files and registry problems. Let’s have a look at each of these screens: 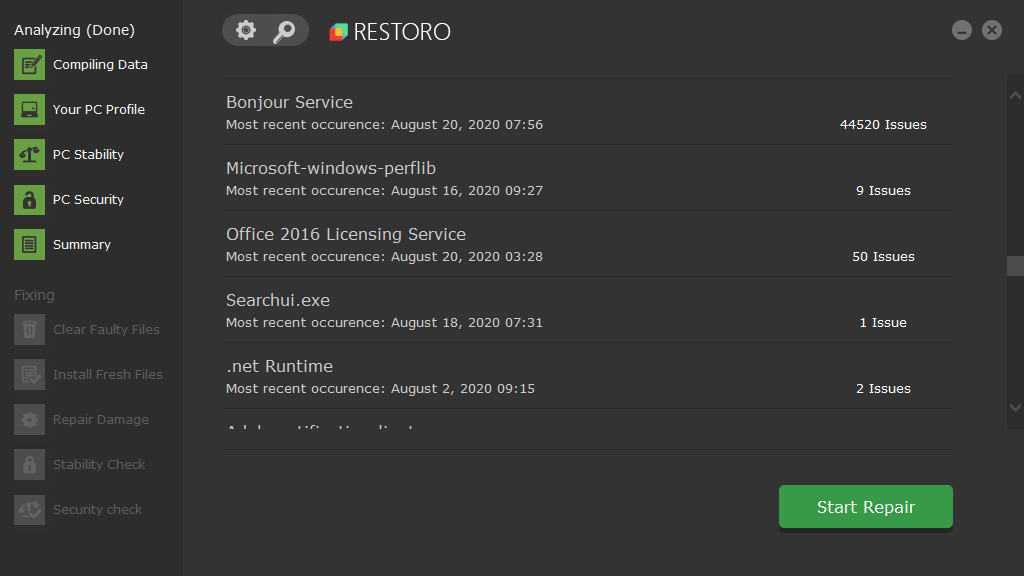 These stability issues are a list of programs that have “crashed in an unusual frequency within the last 4 months,” according to Restoro. This screenshot only shows some of the 17 programs that were found to have issues. As you can see, “Bonjour Service” somehow has 44,520 issues on my PC. The other programs that had a lot of issues, not pictured here, were “Esent” (1,285 issues) and “Software Protection Platform Service” (480 issues). These are in-built Windows services, whereas Bonjour Service apparently comes from Apple (my PC has iTunes on it, so I’m guessing it’s from that). 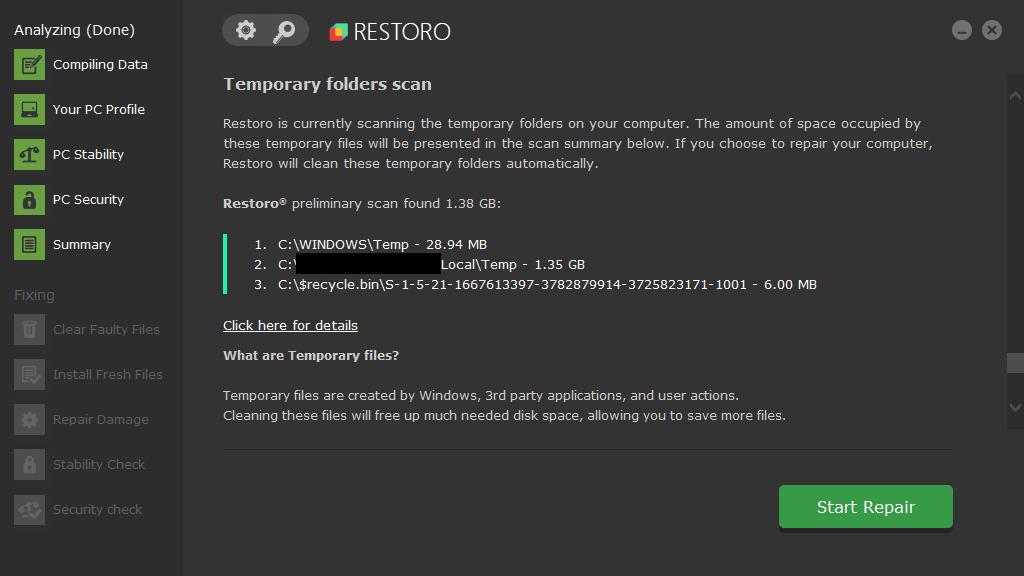 The folder 1.35 GB large here is just C:/Users/User/AppData/Local/Temp, which you can easily see the size of yourself. The same goes for the other 2 temporary folders Restoro looks at, and you of course do not need this software to tell you the size of all your temporary folders.

This is a sample of some of the registry issues Restoro found on my PC: 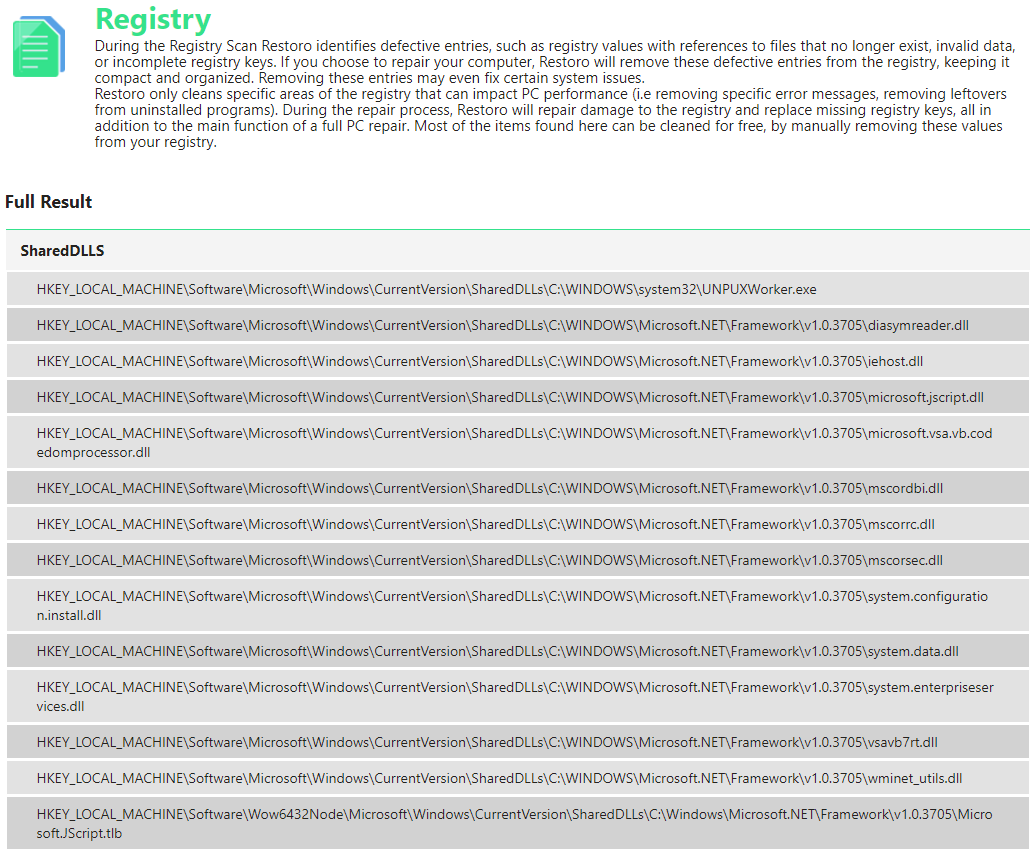 I had had issues with installing the .NET framework before, so I’m guessing these registry issues are a result of that. Beyond Microsoft.NET issues as pictured here, there were a few other miscellaneous registry issues: 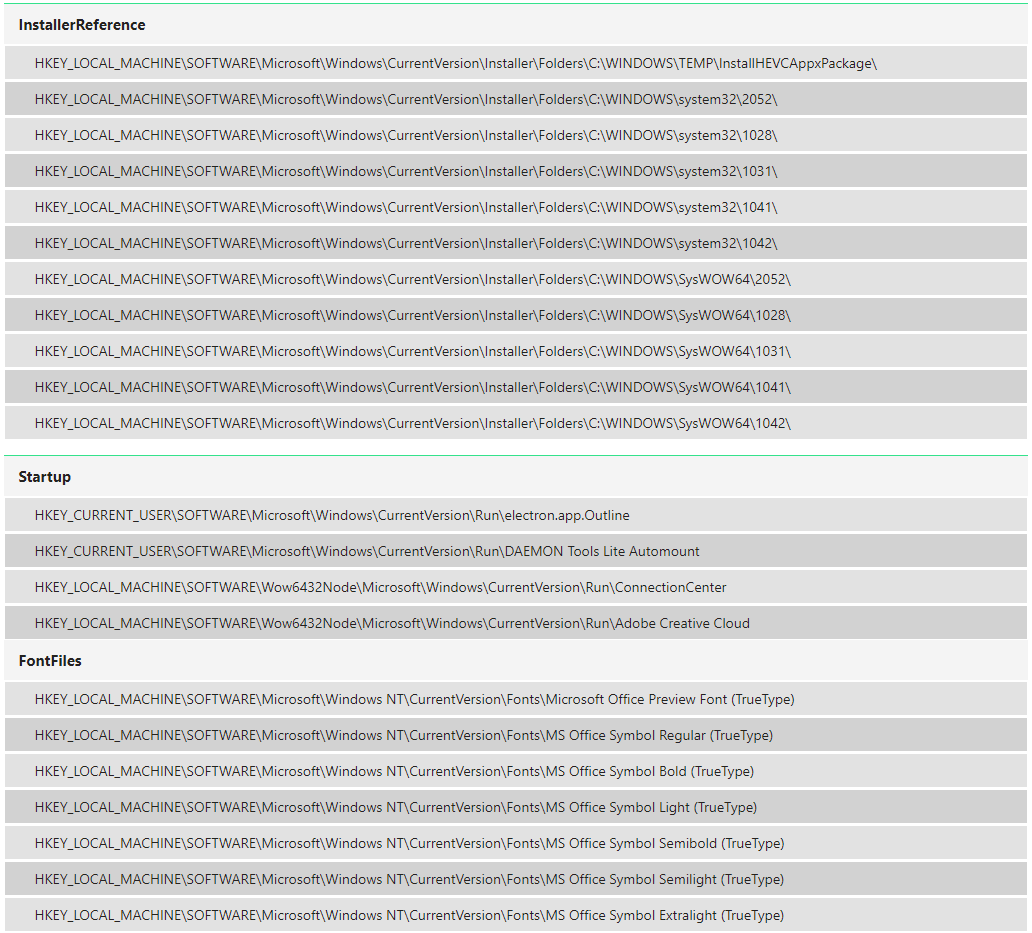 In the case of the InstallerReference files, it’s unclear what they are and how severe they are.

Restoro is safe in that you can expect it not to mangle up your computer, and I have not read any reports of it corrupting a system in any way. I had no issues with it. However, I should mention that in my testing of it there were some rather aggressive and annoying marketing tactics where as long as I had Restoro installed on my machine, it would often come up with pop-up videos asking me to buy the full version — even when I wasn’t using the software at all. That’s my only complaint with it as far as its user experience and whether it’s safe. After testing Restoro for this review, I was able to uninstall it completely without any issues.

Does Restoro come up with false positives to get you to buy the software?

This is a common tactic fake anti-virus software does to scare you and think you need to pay for a full version. I do not believe Restoro does this (if you have firm evidence that Restoro does make up false positives in any way, please contact us with the details and we’ll investigate). In my testing of Restoro, everything it came back with was real. I also spent a fair amount of time searching online for reports of fake reports from Restoro (e.g. there are many threads on it on anti-virus and Microsoft forums like this one) but didn’t see any conclusive evidence against it.

Is there a free, cracked or torrented version of Restoro?

We do not condone stealing software, and doubt there is a reliable cracked version of Restoro in any case (if you find one, very good chance it’s a virus). If you want a license key for it, buy it.

Are there any coupon or promo codes for Restoro?

If there are any coupon or promo codes for Restoro right now, they should be available on the latest page of the website here.

Should you pay for Restoro?

In cases where you’ve done a scan with Restoro and are sure it’s found something that is the cause or the primary cause of the issues you’ve been having with your computer, then it’s worth considering buying the full version. Restoro is priced reasonably (29 Euros if you are just using it for a one-time repair).

Can you get a refund for Restoro?

Per Restoro’s refund policy, they offer a 60-day money back guarantee, but it’s not given automatically. To get a refund you’ll have to explain why Restoro isn’t working for you and completely undo any changes Restoro may have made to your computer.

What are the alternatives and competitors to Restoro?

There’s a lot of PC repair and tuneup software. Here are some of the main competitors of Restoro that I’ve reviewed:

If you’re having issues with your computer and don’t know why, I definitely recommend downloading the free version of Restoro and doing a scan. There’s a decent chance it will find the root cause of the issue(s), then it’s up to you whether you want to buy the full version or not.