Before jumping into the review, in case you’re here for a 40% discount on Icecream Screen Recorder, try this link:

I can’t guarantee this will work for you now, but at the time of writing, this works for getting 40% off, making the price only $17.97:

You’re offered this if you uninstall the software: 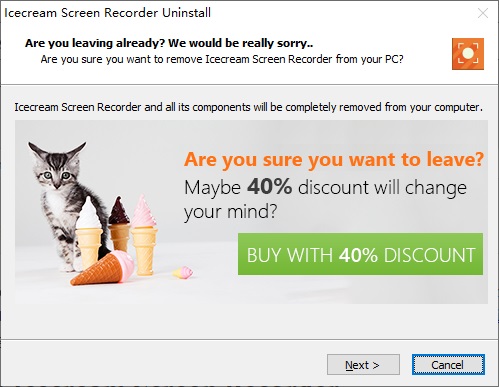 Getting started with Icecream Screen Recorder

To first install Icecream Screen Recorder, go to icecreamapps.com/Screen-Recorder and click the green “Free Download” button. This will begin the download of screen_recorder_setup.exe, about 54MB. Open this and there’s a bog-standard install process: 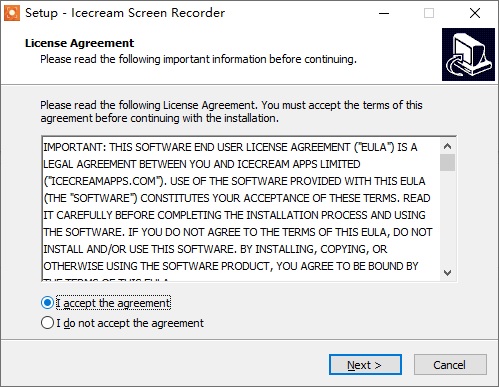 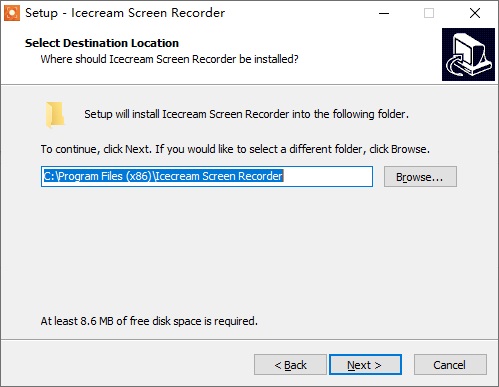 After install, upon opening the software you’ll be asked what to allow it to record and a couple of other settings (this can be changed in future): 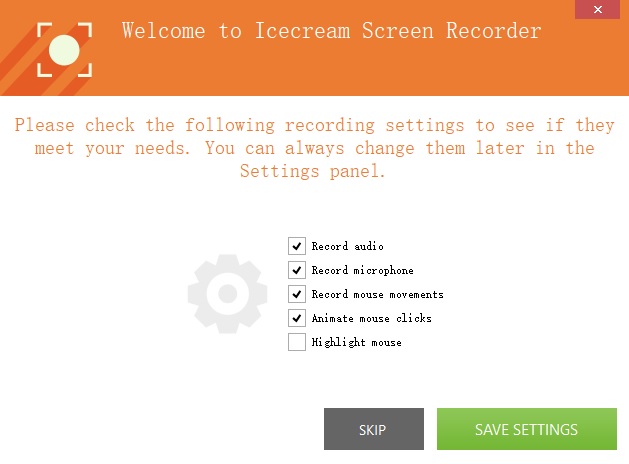 And then you’ll see a nice attractive orange dashboard: 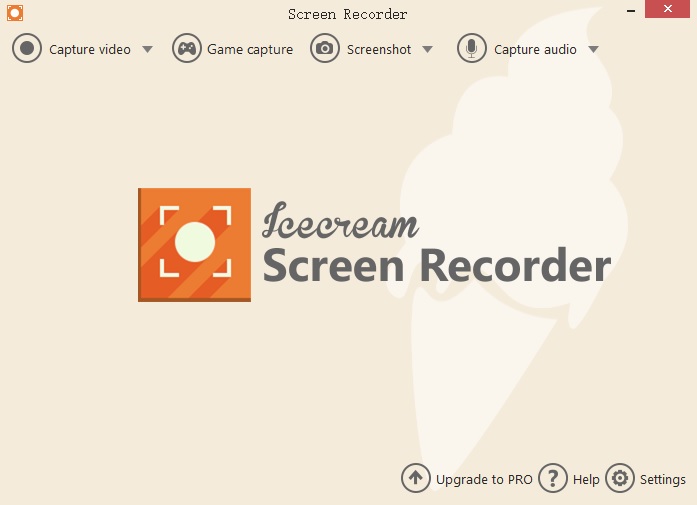 How to use Icecream Screen Recorder

Using Icecream Screen Recorder is pretty much 100% self-explanatory. To capture a video, move your mouse cursor to the “Capture video” button in the top left and select what portion of the screen you’d like to record: 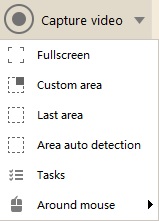 When you’ve selected the part of the screen you’d like to record, you’ll get a nice taskbar like this:

Here you can of course start and stop recording, as well as have a timer (so it automatically stops recording after a certain time), the ability to draw in the recording area (or write text), magnify and minify, and use your webcam if you like.

Once you’ve stopped recording your video, you’ll be asked to name it: 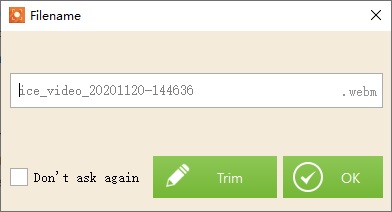 Then the video will be saved and it will appear on the main screen of the software: 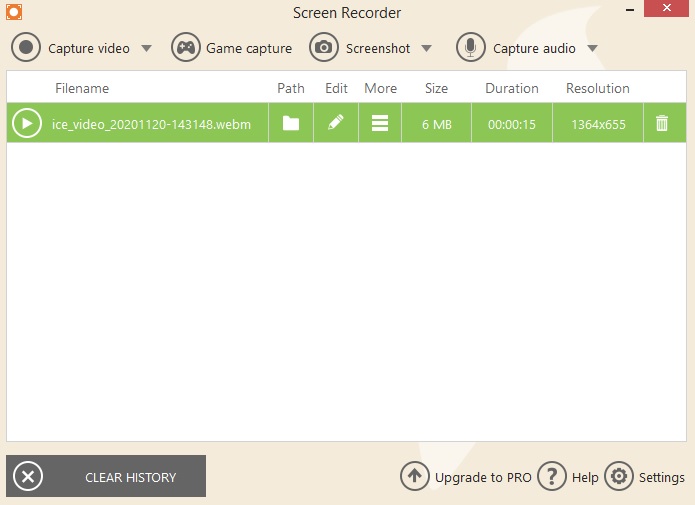 If you click the “Edit” icon for any video you’ve made here, you can change the format, resolution and speed.

Here’s a (very simple) example of a video I made with Icecream Screen Recorder:

Is Icecream Screen Recorder safe? Is it a virus?

Icecream Screen Recorder is safe, and definitely not a virus. I have read no reports of this software being unsafe and found no signs of it being unsafe during my testing of it.

How does Icecream Screen Recorder compare to the competition?

There are a number of screen recorders that compete with Icecream, most notably Camtasia (paid) and Camstudio (free). There’s also these other established players:

Let’s do a comparison of these tools with Icecream Screen Recorder.

Icecream Screen Recorder vs Camstudio: The distinguishing and best feature of Camstudio is it’s free, and it’s been around for 19 years. However, it’s very far from perfect. Its last stable release was years ago in 2016 (unlike Icecream Screen Recorder which updates multiple times a year as mentioned) and there are numerous complaints on it (see the 1 star reviews here). Speaking of Camstudio complaints, there’s been a lot of controversy about it coming with malware, but as of late 2020 and early 2021 I do not believe the official version of Camstudio at camstudio.org comes with any malware (it might just be bundled with malware if you download it from a non-official source).

Icecream Screen Recorder vs TinyTake: TinyTake, another reputable product, is free for personal use and doesn’t include an ugly watermark (though it still limits you to 5 minutes). Use it for making simple and short screen recordings for non-commercial purposes. However, I don’t recommend it for any commercial use, as it charges PER YEAR ($29.95/year at the lowest level, which still limits you to 15 minutes) and is therefore terrible value compared to Icecream Screen Recorder which costs only $29.95 for lifetime use.

How do I use hotkeys? There are loads of hotkeys available in Icecream Screen Recorder that make recording videos easier (to change these, go to “Settings” in the bottom right, then the “Hotkeys” tab): 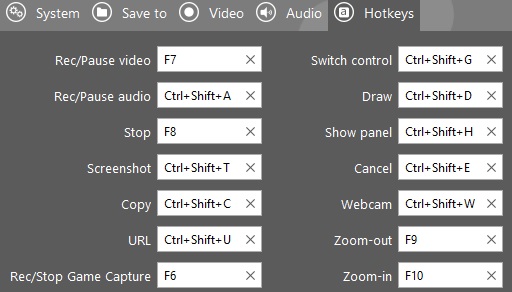 The most useful of these are just F7 and F8 (to start recording and stop recording).

Why is there no sound? If there’s no sound for your videos, make sure you’re enabling recording audio (for sounds within programs on your computer) and recording microphone (for recording external audio). You can check these within the “Audio” tab of the “Settings” menu:

Taken straight from the actual software, this is the difference between free and pro versions of Icecream Screen Recorder:

You can use the free version of Icecream Screen Recorder to make amateur screen recordings less than 5 minutes in length, but if you’re making anything professional you’ll definitely want to upgrade to pro to remove the watermark. As mentioned, the Pro version of Icecream Screen Recorder is priced reasonably at a one-time fee of $29.95 (or $17.97 if the aforementioned discount works for you).

What’s my verdict on Icecream Screen Recorder? Good or bad?

Icecream Screen Recorder is an excellent little piece of software in my view. It worked without any issues for me, was super-simple to use, and isn’t bloated with unnecessary features or problems that plague a lot of software these days. Therefore, I recommend trying it out. Just have a read through my comparisons of Icecream Screen Recorder with other screen recorders (above) before buying the Pro version.

I am a programmer and tech guy responsible for reviewing tech-related products such as autoresponders, WordPress plugins, apps and B2B software.