Visit the latest website for AOMEI Backupper (2021) here – if purchasing the software, use the discount code OUTWITTRADE (our code) for a further 10% off. There may be even bigger discounts available on that page depending on the time of year.

AOMEI Backupper is one of the most popular software products for backing up Windows, with a claimed 20 million+ downloads and thousands of searches for it each month. I spent many hours testing this product and investigating how well it works, and have outlined all my findings below. Read my verdict on how good AOMEI Backupper is here or keep reading for a walkthrough of the software and a comprehensive FAQ.

How do you use AOMEI Backupper?

AOMEI Backupper can be tried and tested for free. First, click the green “Download Freeware” button for the standard edition here and enter your email to start the download. You should not download the software from anywhere other than the official website (ubackup.com). The current version of AOMEI Backupper at the time of writing is 112MB.

Once you open the .exe file, you’ll be taken to the install screen: 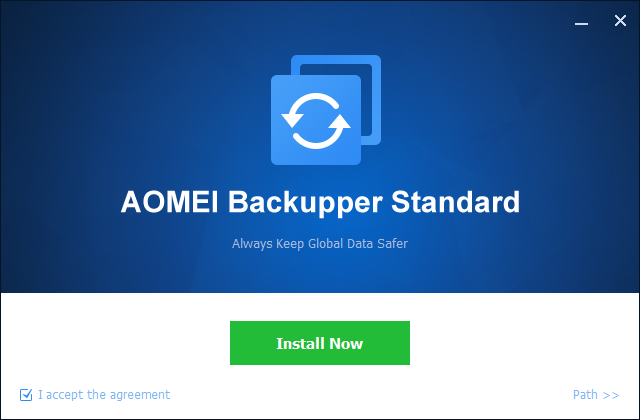 On my reasonably modern laptop with 16GB RAM, this took about 2 minutes.

When you’re done with the short install process, you’ll be taken to the main screen of the software: 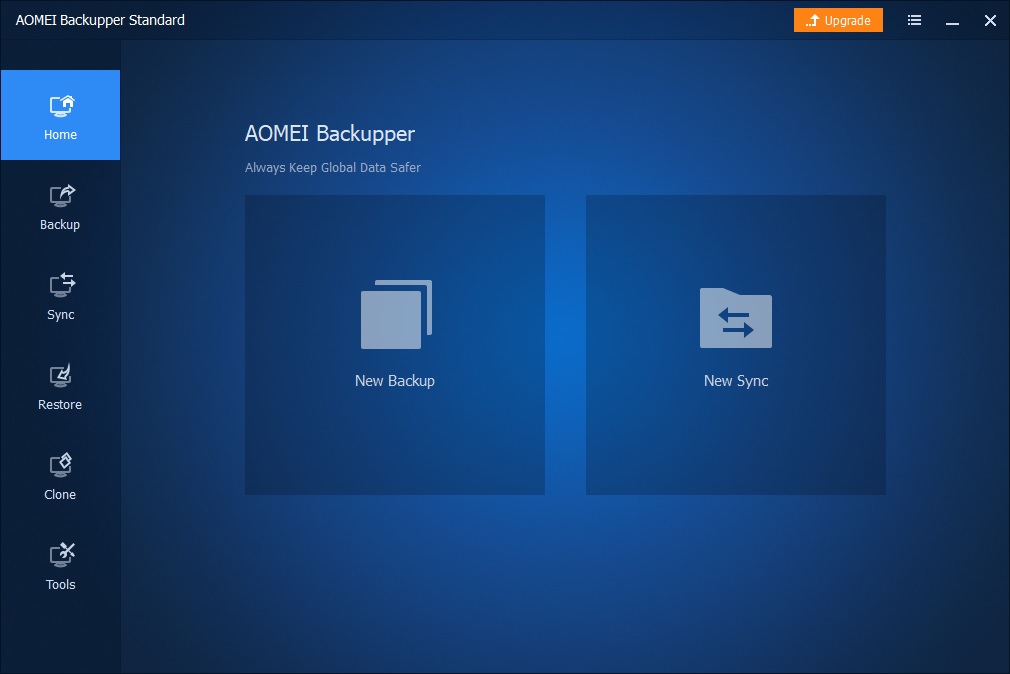 As you can see, Backupper has a sleek and clean interface. If you read older reviews of this software from 2017 and 2018, many mention that it looks outdated, but it seems AOMEI listened to that feedback and redesigned it to be much better (the interface above is how Backupper looks as of late 2020). Click on “New Backup” and you’ll be presented with these options: 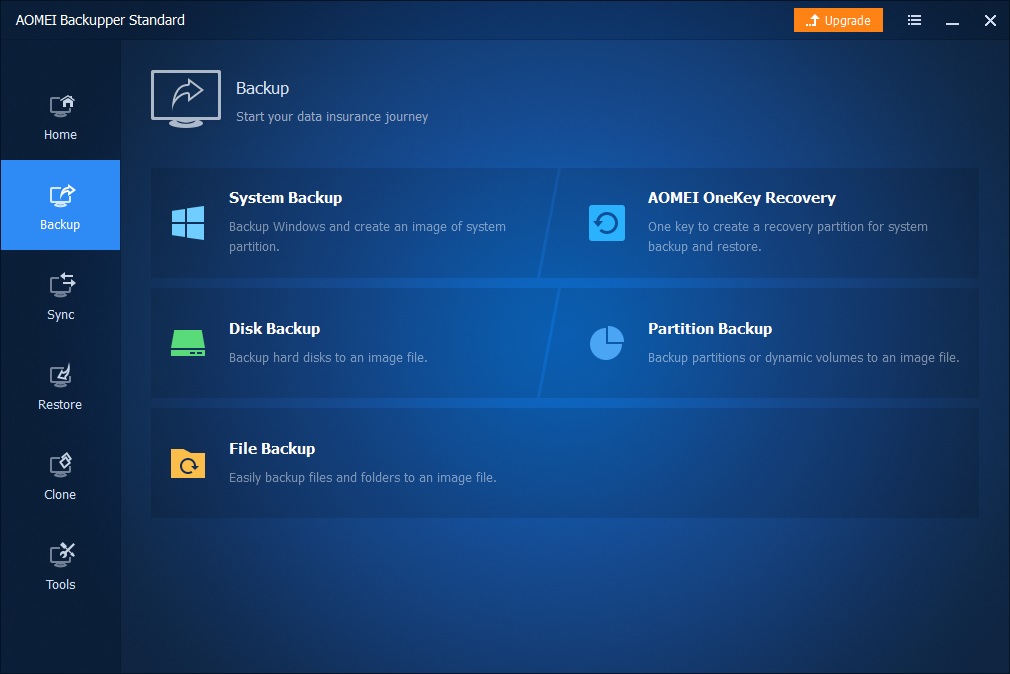 Let’s look at the simplest option first: file backup. Using Backupper, you can easily backup a single file to an image file that you can then later use Backupper to restore. Here’s a simple example of me backing up a random file to some folder: 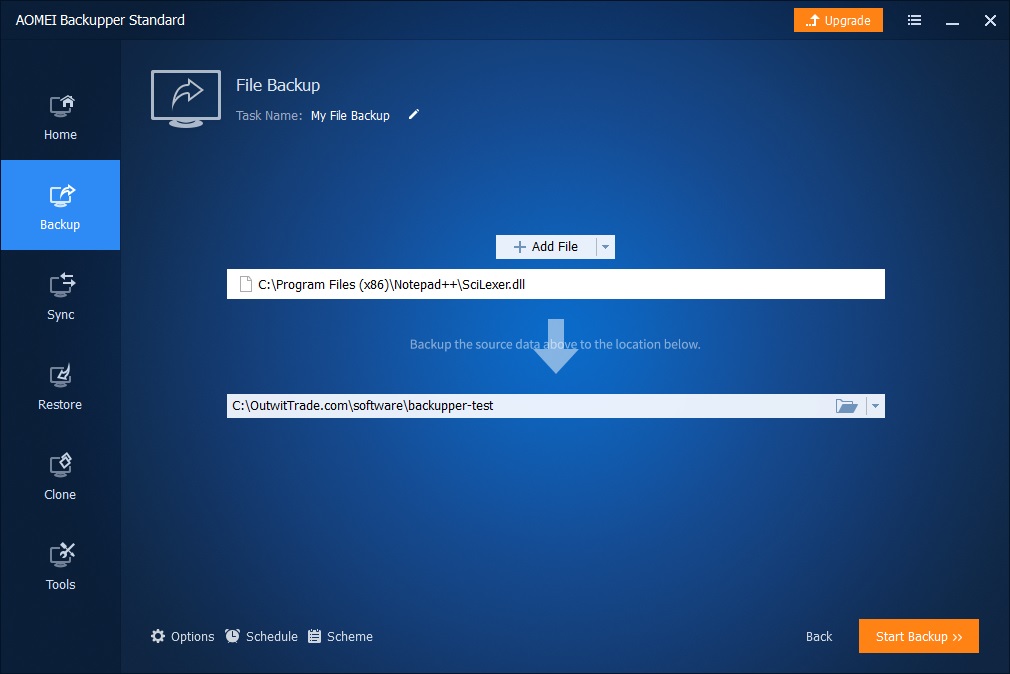 This particular file was less than 2MB in size, so it was backed up very quickly: 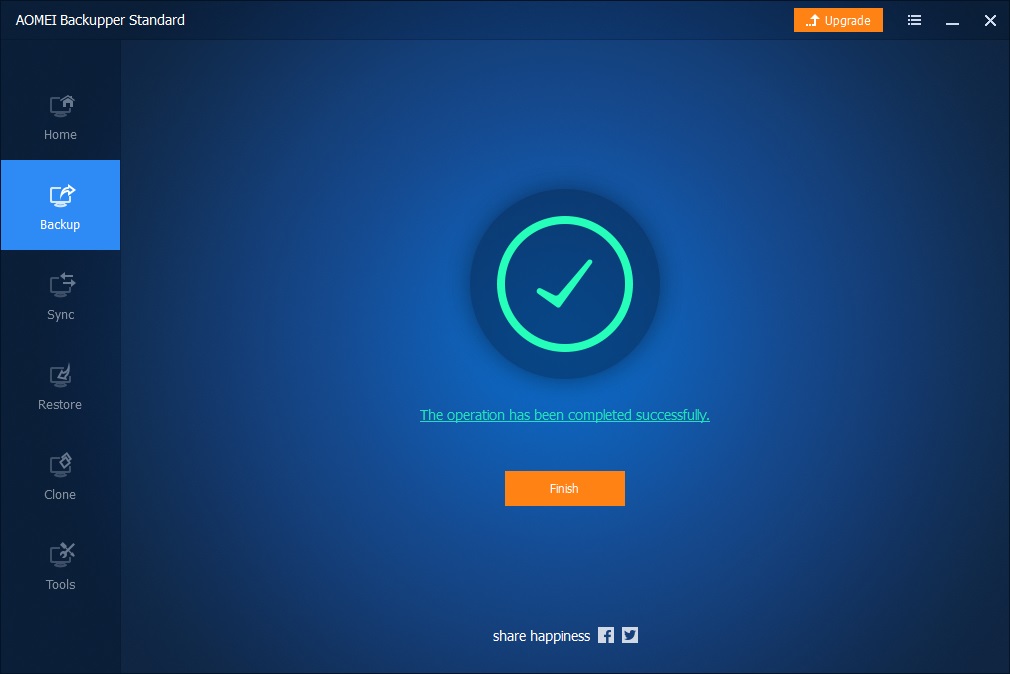 Then, you can use Backupper to restore it at any time: 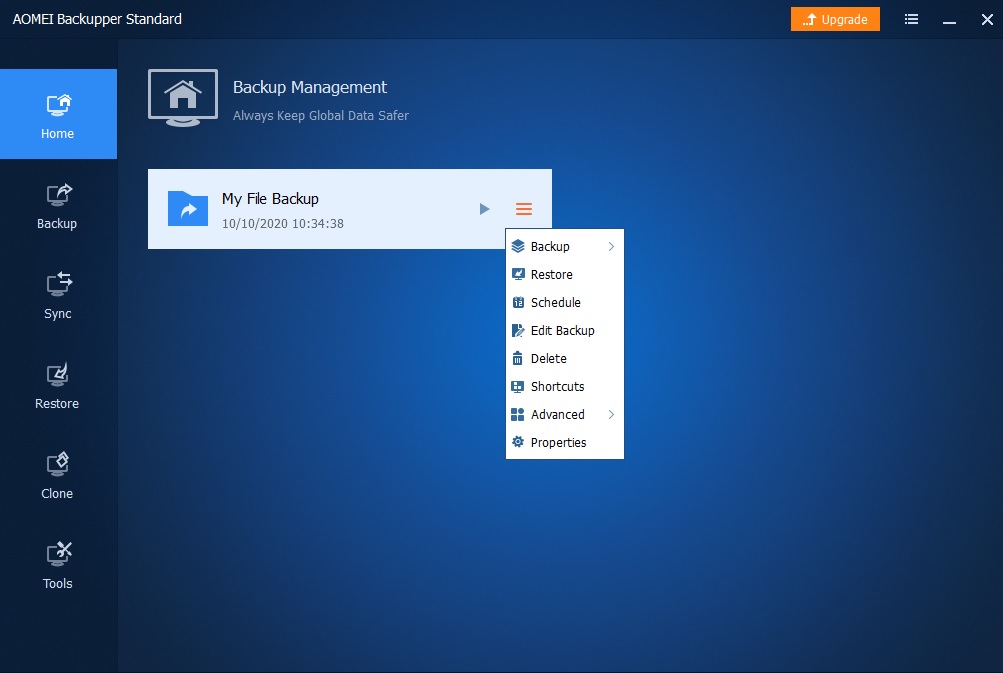 But if you’re using the other backup options (disk backup, system backup or partition backup), using Backupper will be a slow process that may very easily take hours. All Windows backup software is like this — if you’re backing up hundreds of gigabytes, it’s not something that can be done in 2 minutes!

Let’s look at an example for doing a disk backup. First you choose the disk to backup. Here’s how it looks on my laptop: 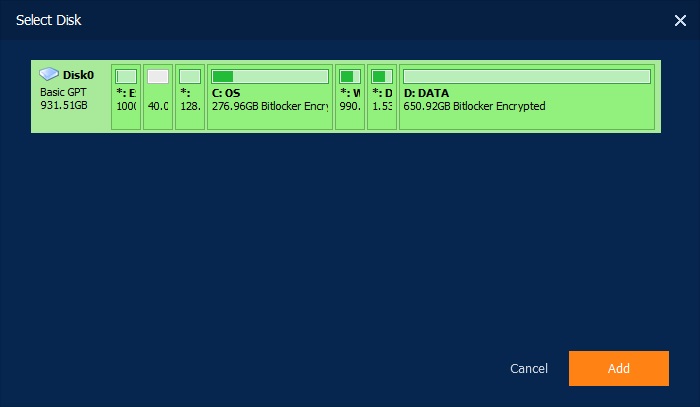 A partition backup, by the way, is the same as this except you can choose to backup just part of the disk (in the example above, I could just select the ‘C: OS’ partition, for example). Then you choose a folder to backup the whole disk to: 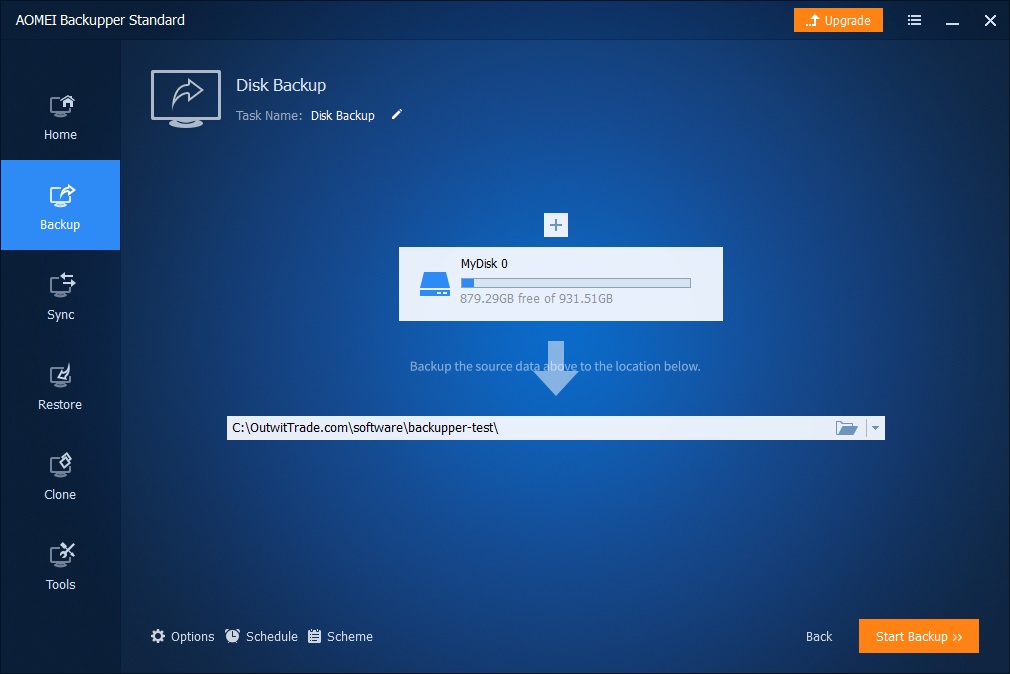 You may have a lot more to backup than this (in my case, I’m using a fairly new laptop, so I only have about 50GB of files).

Once you’ve started a backup, you can click the “Backing up data…” text to get some information on the backup process: 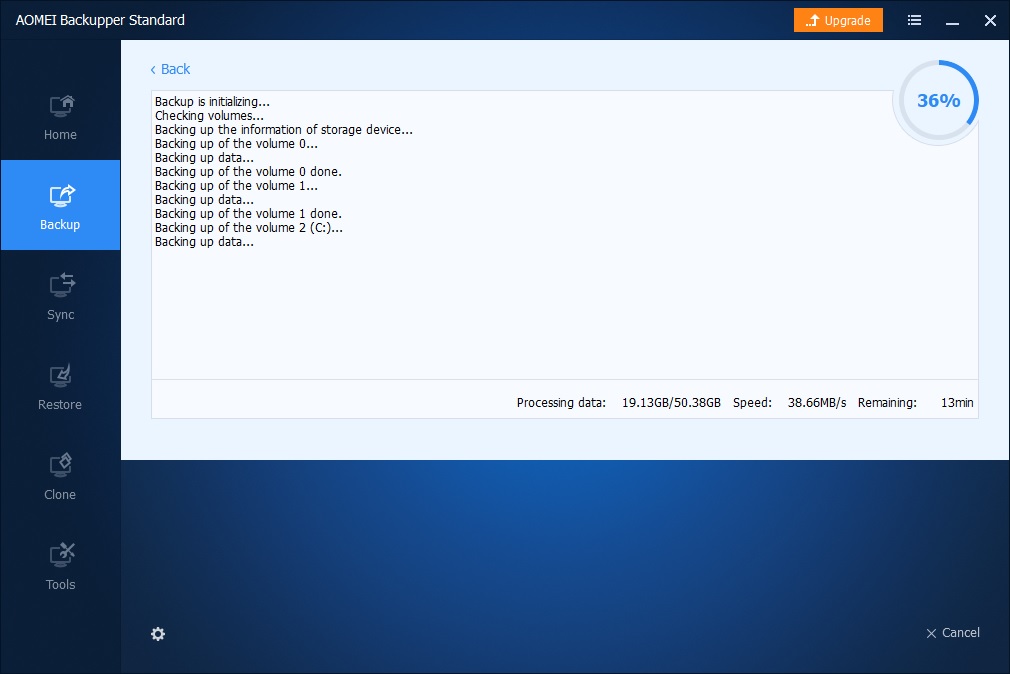 Your speeds will vary depending on your computer, but Backupper would backup data at a rate of around 38MB per second for me, as shown above. That’s less than 1 minute for every 2GB backed up, so even if you’re backing up a huge system of say 1 Terabyte or more, I would expect it to finish on most computers within 24 hours.

After backing up the disk on my computer, here’s the file that was generated:

The backed-up file is compressed, so it’s only half the size of the raw amount of data that was backed up.

A system backup, in comparison to a disk backup above, will backup not just all of your files, but all contents in the system drive, including Windows files and custom settings. You should use a disk backup for backing up just your files, and a system backup to backup absolutely everything on your computer such that you could restore your computer to exactly how it was before from a blank slate.

Here’s the starting screen for a system backup on my laptop: 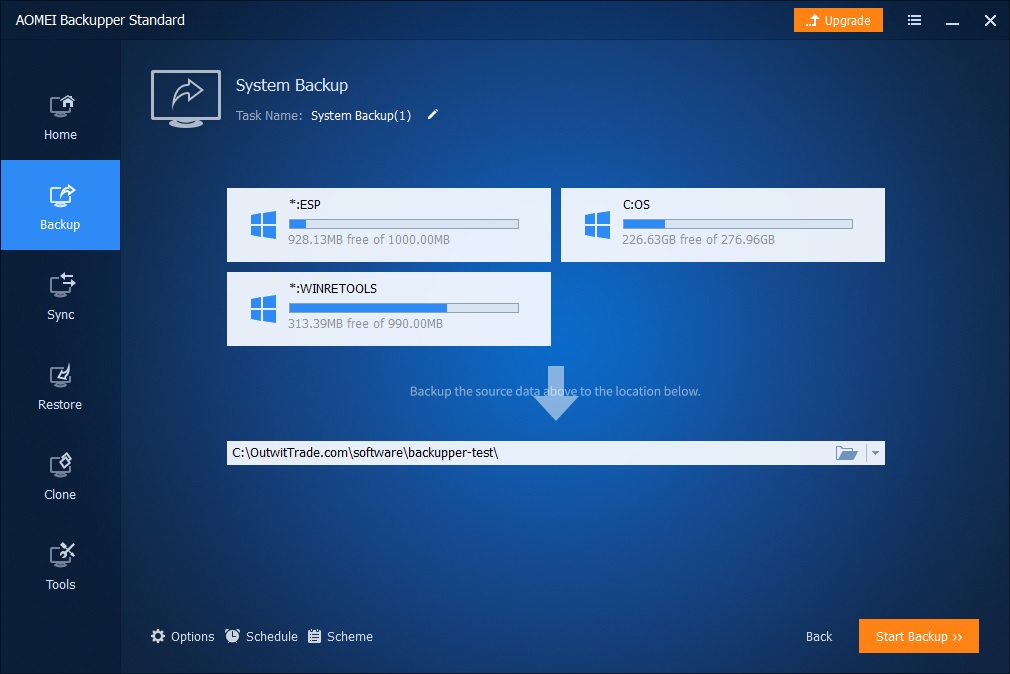 Because this system backup backups everything, it’ll be even bigger than a disk backup: 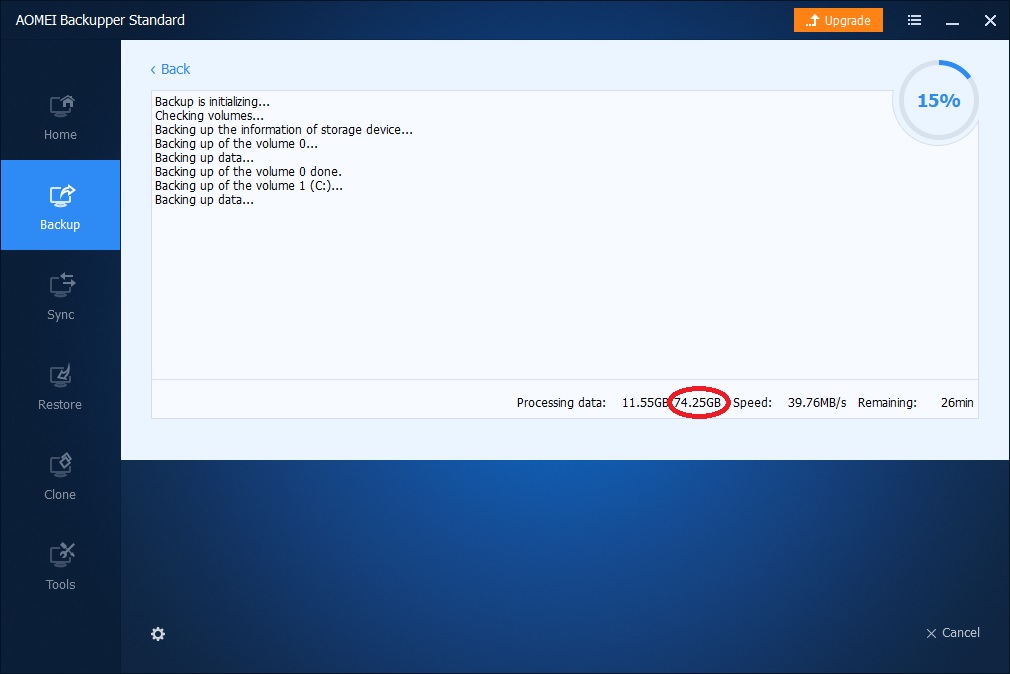 As with other backups I tried, this worked successfully and resulted in this full system backup file:

No. I have not found any signs that Backupper contains any malware or any kind.

I believe Backupper is safe, as it worked without any issues for me and the vast majority of users report to have no serious issues with it on other review sites. There are just a handful of people claiming that the software somehow corrupted their computer (see here and here for example). I am not sure if these are issues with Backupper specifically, or the users computer itself.

And a lot more (see the full details on the differences between different versions on this comparison page here).

If you’re using Backupper for business purposes, there are also the Workstation, Server, Technician and Technician Plus versions.

Needless to say, what version of Backupper you’ll want to use depends on your specific needs, but you may be able to get away with just using the free Standard version. Download that first and only pay for anything if you really need some specific feature(s).

Is Backupper as popular as they say it is?

It’s impossible to independently verify that Backupper has been downloaded over 20 million times as AOMEI claims, since only AOMEI could have stats on how many people have downloaded the software from their official website. But in any case, Backupper is definitely extremely popular software. Ahrefs (a keyword research tool) reports that there are about 146,000 searches per month for “AOMEI Backupper” (just 34,000 of which take place in the US), which would definitely support the claim that Backupper has been downloaded millions of times:

Is there a crack, key or torrent for Backupper?

I doubt there is any working crack, key or torrent for Backupper, and you are taking major risk in downloading any “cracked” version (more than likely it’s a virus).

I have not had to contact AOMEI’s support myself, since I did not have any issues with Backupper during my testing of it. Therefore, I can’t comment on AOMEI’s support with any first-hand experience. They at least appear to have decent support based on how they reply to reviews and comments online. There is also an active forum which looks helpful for troubleshooting issues, since all threads there asking for help seem to get replies.

What discounts or coupon codes are available for Backupper?

Go to this page on the AOMEI website and enter the code OUTWITTRADE (our referral code) to get 10% off. Sometimes AOMEI will have even bigger discounts available through that link (up to 30% off).

Does Backupper work on Linux?

Can you get a refund for Backupper?

AOMEI offers a 90-day unconditional money back guarantee, and it definitely looks like they honor this (e.g. see here and here).

I found AOMEI Backupper to be a pleasure to use, and can definitely recommend it for any kind of Windows backup job.