If you go to the Zemana AntiMalware page on Zemana’s website, there’s barely 2 sentences of information on it, and it’s far less-known than antivirus tools from the big dogs in this market like Malwarebytes, Kaspersky and Avast. So is it safe? Does it actually remove malware? Should you use it over its numerous competitors? In this review I’ll answer these questions and other commonly-asked questions about Zemana, and finally give my verdict on whether Zemana AntiMalware is actually any good.

First, a quick introduction to the company behind the software.

Zemana, based in Turkey, was founded in 2007 with the goal to “provide the world with innovative cyber-security solutions” (link). The current CEO and co-founder of Zemana is Orhan Akyurek (active on Twitter and LinkedIn, though mostly in Turkish). On ZoomInfo, Zemana is listed as having revenue of $18 Million and 96 employees. I’m not sure about Zemana’s actual revenue numbers, though, since Owler (a competing company info site that hides its content behind popups) lists Zemana’s revenue as $10 million, while RocketReach lists their revenue at a much bigger $79 million. I can at least confirm that many real people (software developers and others) work for Zemana, as in Googling people listed at the company (such as on their ZoomInfo page) you can find legitimate LinkedIn or other profiles for them, where Zemana is listed as their place of employment.

Therefore, while Zemana is by no means a giant company, it’s also not a 2-guys-working-in-a-shed type outfit.

Go to https://www.zemana.com/antimalware and click the DOWNLOAD FREE DEMO button, then run the setup .exe (just over 12MB): 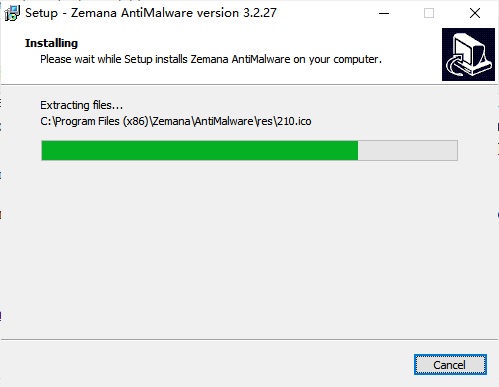 After installing Zemana AntiMalware, you’ll see a dashboard like this: 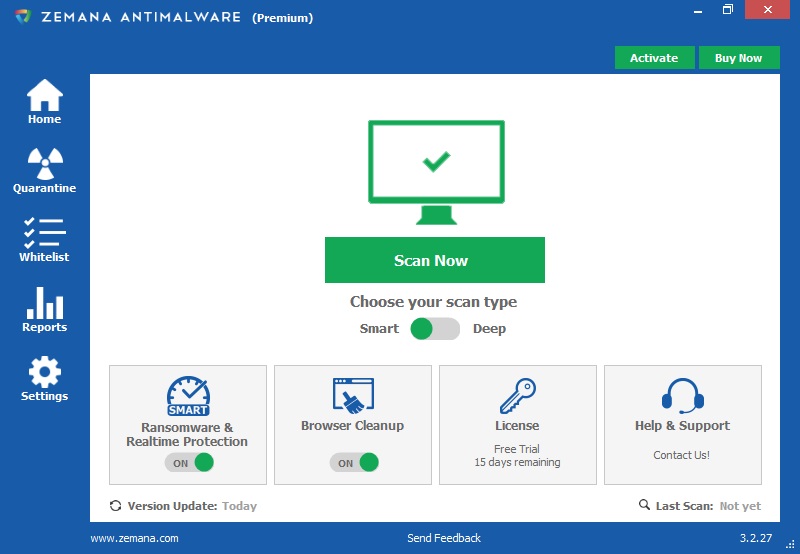 Let’s take a look at the features here.

First, a “smart” scan. This took about 3 minutes on my laptop and found no issues (this is a laptop that’s just a few months old and I have only downloaded trusted software that I test in our software reviews, so I was expecting it to be clean): 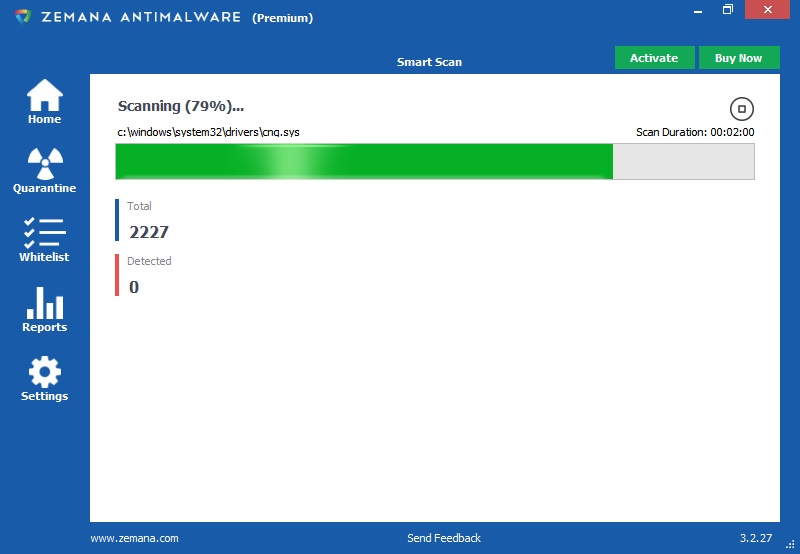 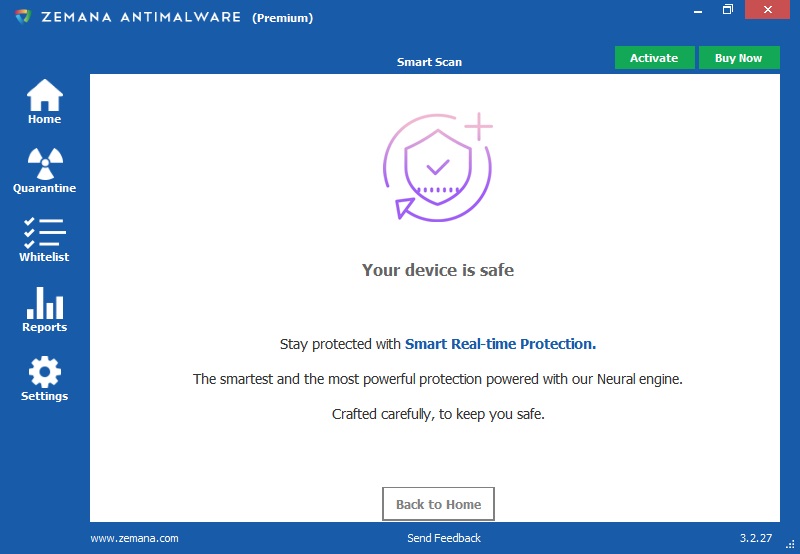 While a smart scan scans your entire PC quickly, a deep scan asks you to specify a specific folder (or a whole drive) to scan in-depth. This is the option you want to use to be thorough. A smart scan may only find the most obvious malware, but the deep scan will have a much higher chance of finding malware that actually tries to hide itself. The disadvantage of the deep scan is it’s about 100x slower. I made it scan my whole C:/ drive, and after over an hour, it’d barely gotten a quarter of the way through: 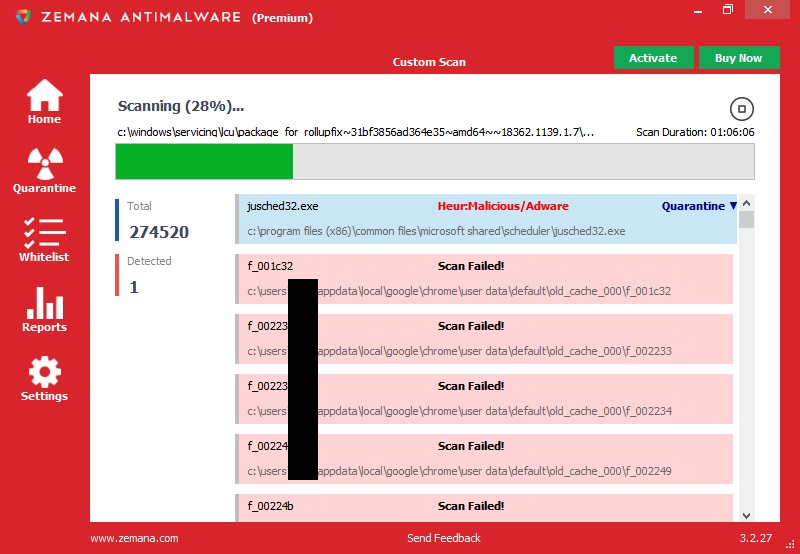 The file Zemana AntiMalware identified as Malicious/Adware here, jusched32.exe, seems to have something to do with Java updates. If you Google this there are some reports of it being malicious (maybe a separate file that names itself jusched32.exe?), but I don’t know for sure.

By default (though you can choose them to delete them instead), files that Zemana AntiMalware finds in scans that it thinks are malicious are placed in the Quarantine section, allowing you to evaluate whether you definitely want to get rid of them.

Files that you tell Zemana AntiMalware to not flag as malicious.

Are there discount coupons for Zemana AntiMalware?

No. On the checkout page when you buy Zemana AntiMalware (managed by 2Checkout), there is no option anywhere at the time of writing to enter a coupon code, nor does Zemana.com mention coupon codes anywhere. As always, many fake coupon sites say there’s a coupon, but the fact remains that there’s nowhere to even enter a coupon when you buy Zemana AntiMalware.

If there are any discounts or promotions running for Zemana AntiMalware, they should be listed on the website right here.

What does Zemana AntiMalware work on?

Is there a crack, serial or license key available for Zemana AntiMalware?

No, and as always, we don’t condone stealing software. And if you really do want a pirated version or keygen for this software, be warned that instead of a free version, you may ironically be downloading a virus instead.

Does Zemana give refunds?

Yes. Zemana gives refunds within 30 days of purchase “for any reason.” I searched to see if people had reported getting refunds and it seems Zemana does honor refunds (e.g. see here).

How do you uninstall Zemana AntiMalware?

The same way you uninstall any other piece of software, via the Control Panel and Add/Remove programs. Zemana AntiMalware has a simple uninstall process and doesn’t annoyingly try to dissuade you from uninstalling it.

Does Zemana actually use AI?

According to Zemana, Zemana AntiMalware uses an “AI engine” for analyzing files and determining if they are malicious or not. As Zemana AntiMalware is of course closed-source and they give no information about how this so-called AI engine works, I can’t answer this question for sure. However, I’m skeptical.

Why? Zemana’s AI works in offline mode, meaning it can’t be doing anything particularly computationally-intensive, since it would have to relying on the hardware of the computer it’s installed on rather than any kind of cloud-compute service. Zemana AntiMalware works on any ordinary old computer and doesn’t take many resources at all (it only took around 10% of my CPU processing power when doing a deep scan according to task manager on my non-GPU laptop), not something that would be possible if any kind of advanced AI/machine learning was happening.

What does Zemana AntiMalware cost?

Assuming there are no discounts running on the website, Zemana has the following pricing structure:

Is Zemana AntiMalware any good?

Yes. Zemana AntiMalware is a legitimate antimalware tool that I recommend trying.

Zemana AntiMalware vs Malwarebytes + others

What to do if Zemana AntiMalware finds nothing, but your computer is still running slow

Computer slowness is not always the result of viruses and malware. If you’re using an old computer, it may just be that you’ve accumulated too much junk on it over the years, and it needs a good clean. Recently I reviewed two good tools for cleaning your PC, which I recommend looking at if you’re experiencing slowness. See my AVG TuneUp review and my CleanMyPC review for a walkthrough of these tools.