Swyftx is another Australian cryptocurrency exchange. Unlike other exchanges, however, with Swyftx you are not trading with other users of the platform. Rather, Swyftx is better described as a broker (see here for the difference between exchanges vs brokers) where rather than trading with other users, your orders get sent to Swyftx and they’ll buy or sell some cryptocurrency on your behalf at one of the market places they work with.

In this Swyftx review, I’ll dig into it and advise whether I recommend using it over the many other exchanges available for Australians. Keep reading or click here to skip to my verdict on how good Swyftx is.

Why listen to me? As an Australian who has traded crypto on and off for years, I have a fair bit of experience testing different Australian exchanges. Beyond my favorite cryptocurrency exchange Independent Reserve (see my Independent Reserve review) where I’ve traded hundreds of thousands of dollars worth of crypto, I’ve also tested CoinSpot (see my CoinSpot review), CoinJar (see my CoinJar review) and the not-at-all-recommended Cointree (see my CoinTree review). Lately, I’ve also tried Bitaroo (see my Bitaroo review) and Digital Surge (see my Digital Surge review).

Signing up to Swyftx

Swyftx has a standard signup process, same as any other exchange: 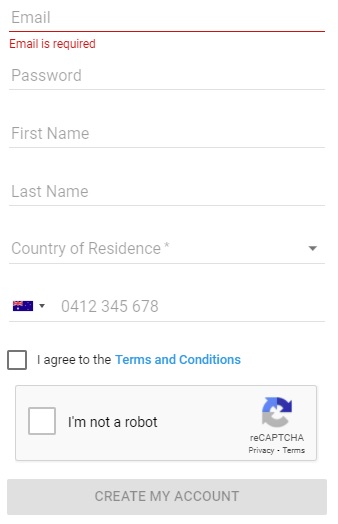 For initial verification, you only need to verify your phone number and enter some basic information about yourself (name, address, DOB). If you start trading any reasonable amount, though, you’ll probably have to do further verification (taking a selfie of yourself as is standard).

To get started on Swyftx you can deposit AUD, BTC, ETH or XRP. An important point is that when you deposit AUD on Swyftx, Swyftx then converts it into USD. It used to be the case that when you deposited AUD, Swyftx would have to charge a 0.4% to 0.6% forex fee when converting it to USD (see here), but according to Swyftx they no longer charge such a fee. Here’s my conversation with Swyftx support staff where I asked about this:

The person who originally came back to me responded saying there was a 0.6% fee, which was a mistake, as I later got this reply from someone else when I asked more questions about it: 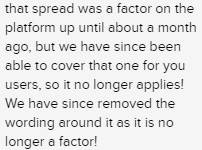 The other potential concern is whether Swyftx converts your AUD to USD at a fair rate (if you have to convert AUD to USD at most Australian banks, they usually give you a horrible exchange rate). Fortunately, Swyft’s exchange rate is always very good — almost exactly the same as what you’d get if you were doing actual forex trading. You’ll see what Swyftx’s current conversion rate to USD is when you go to make a deposit, on the page at https://trade.swyftx.com.au/trade/AUD/deposit: 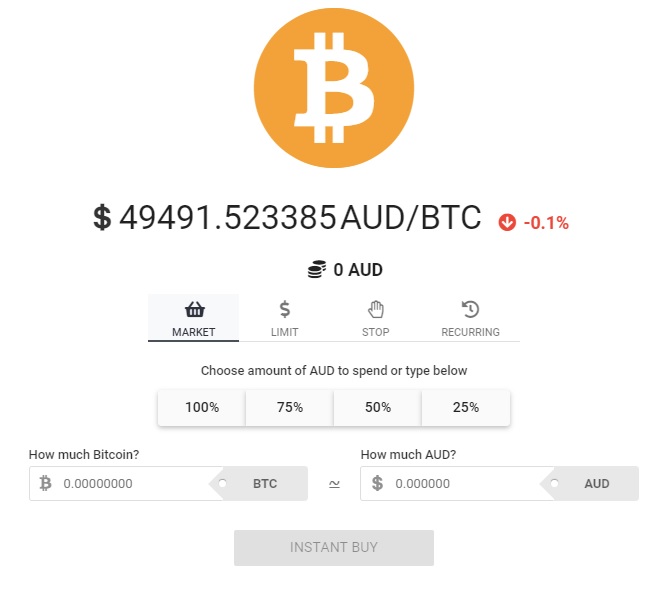 The same thing for selling: 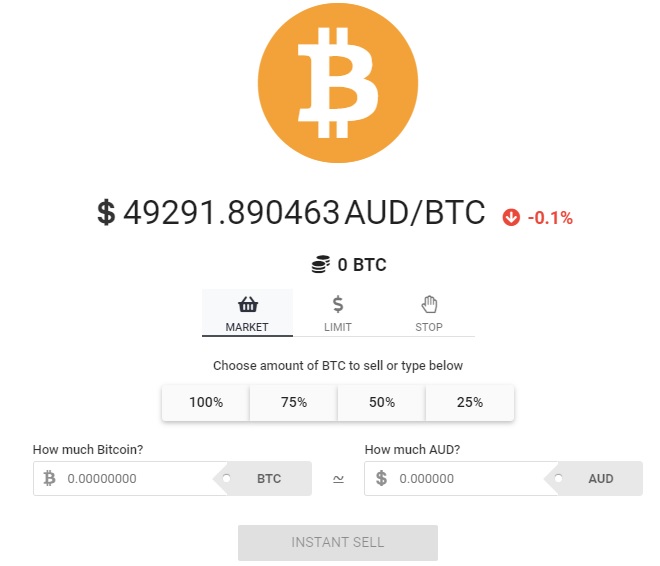 This is a nice and simple interface, though I’d prefer if it would show both the buy and sell price on the same screen. Swyftx also offers charts and a list of orders made (the usual things you would expect).

As far as trading fees go, Swyftx charges a standard 0.6% commission, which is not very competitive. CoinJar, CoinSpot and Digital Surge (as long as you use them properly, as I explain in my reviews) all have much lower trading fees, between 0 and 0.3%. Even Independent Reserve, which charges a relatively high 0.5%, is lower. Swyftx is aware that their fees are higher than others and claims that it’s their lower spreads that make them better than other exchanges (see their fee page): 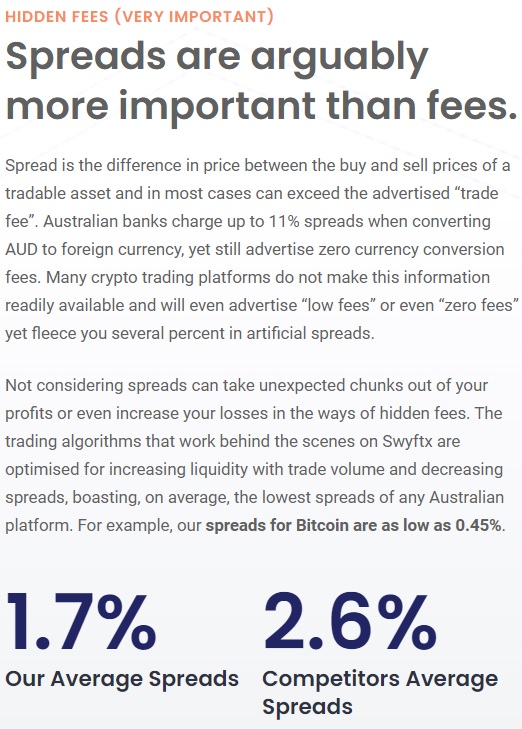 It’s hard to trust exchanges when they say they have lower spreads than competitors (Digital Surge also makes claims about having lower spreads, which I did some checking of in my review of them). You can only really compare the numbers yourself. So, at the time of writing, here are some examples of how Swyftx’s spread compares to Independent Reserve and Digital Surge:

These may be very different if and when you compare spreads yourself (they will change all the time). But my impression of spreads on Swyftx is that like Digital Surge, they definitely have lower spreads than other exchanges if you are trading smaller cryptocurrencies. That’s because Swyftx, like Digital Surge, can tap into other market places when trading altcoins that provide more trading volume and therefore lower spreads.

Other things of note about Swyftx

I consider Swyftx to be similar to Digital Surge. Both Swyftx and Digital Surge are not ideal if you’re trading Bitcoin and Ethereum, but if you’re looking to trade smaller cryptocurrencies, they’re definitely the best 2 exchanges in Australia for this purpose. So definitely sign up to Swyftx if you’re looking to trade altcoins. It’s hard to say definitively whether Swyftx is better or worse than Digital Surge. I recommend signing up to both, and when you’re trading some altcoin, check the prices on both of them.

Where do I get $10 of free Bitcoin from Swyftx?

Sign up to Swyftx here to get $10 of free Bitcoin. If you sign up directly at Swyftx.com.au instead, you’ll miss out on the Bitcoin.

What about if you want to buy Bitcoin only?

If you’re only looking to trade Bitcoin, I don’t necessarily recommend signing up to Swyftx, as there are other exchanges where you’ll pay lower fees or get lower spreads. These other Australian exchanges are more suitable for that:

Finally: Do you have to use an Australian-based crypto exchange if you're Australian?

It's worth mentioning that as an Australian, you're not limited only to Australian-based crypto exchanges. In addition to the above, I also recommend signing up to Binance (see my Binance review), the biggest exchange in the world right now. You can sign up and use them as an Australian and buy crypto with AUD with no issues. I've been a Binance user for a while and enjoy a lot of their features, especially the ability to earn passive interest on crypto and stablecoins. Binance has heaps of features that no Australian exchange offers, so you should definitely sign up to them.

Also, in addition to Binance, check out Bittrex, Bitstamp and Poloniex (all these exchanges allow Australian users). These are my personal referral links which can sometimes get you perks if you sign up through them (e.g. if you sign up to Poloniex using my Referral Code RKLBN4YZ, you'll also get a 10% rebate on trading fees).

Signup to Swyftx and get $10 worth of Bitcoin

Before you leave, know this: Swyftx is running a promotion right now where they give you $10 worth of Bitcoin if you signup. Well worth doing, even if you don’t plan on using it much (or at all):

Signup to Swyftx here and get $10 of free Bitcoin