Mondly, based in Romania, was founded in 2014 and is now one of the many language learning apps that has taken off in recent years. Here I’ll review it and advise why it may be worth using for beginners who are yet to start learning a new foreign language, but for anyone who has already reached a reasonable level, it’s not recommended. Read on to see why.

Mondly is available both on your computer (on the Mondly.com website – you don’t need to download any software) and as an iOS and Android app. In this review I tested the website version, but all the points below as far as how useful Mondly is will be applicable to both the website and app versions.

If you’re on the website, signing up to Mondly is easy: 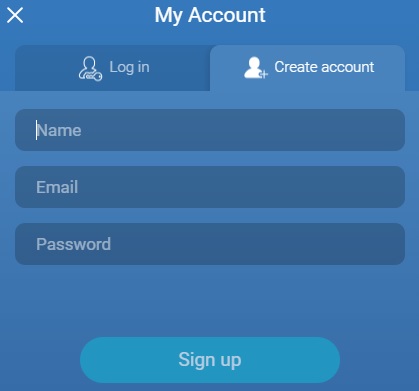 You’re then prompted to select your native language and the language you want to learn. As I have a reasonable level of proficiency in Mandarin Chinese, I chose Chinese, but I later also played around with other languages.

After you select your languages you’ll be taken to the main dashboard (click to enlarge):

Before you pay for a Premium account, the vast majority of lessons (short of 8 simple introductory lessons and a Daily lesson) will be locked, as you can see above. Lessons in Mondly are grouped into themes like Family, Countries, Weather, Romance and so on, and each one will have a certain number of phrases and words you will learn: 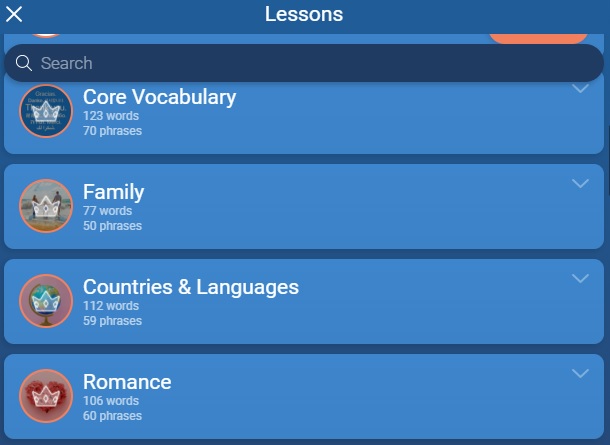 However, while the content of lessons is of course completely different between lessons, the structure is 100% the same. Every Mondly lesson will just have one or more of the following: 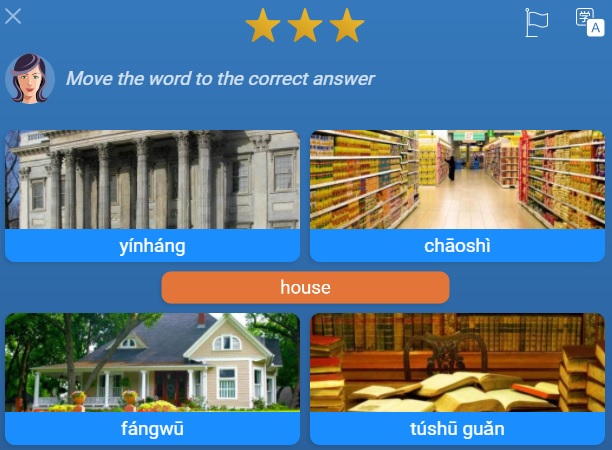 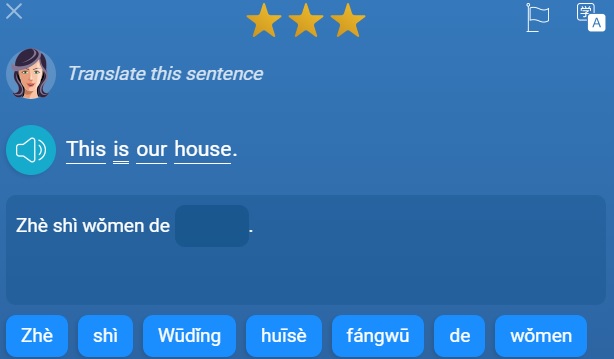 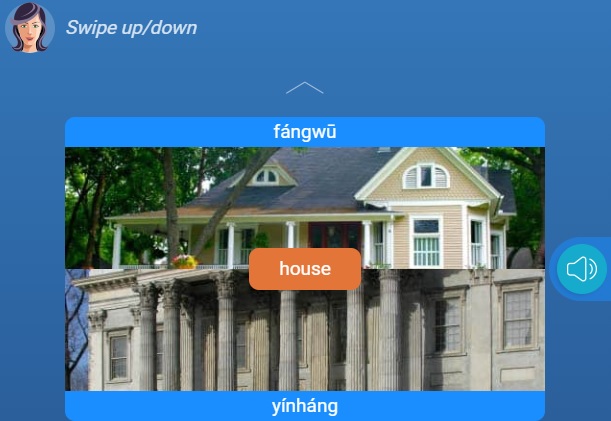 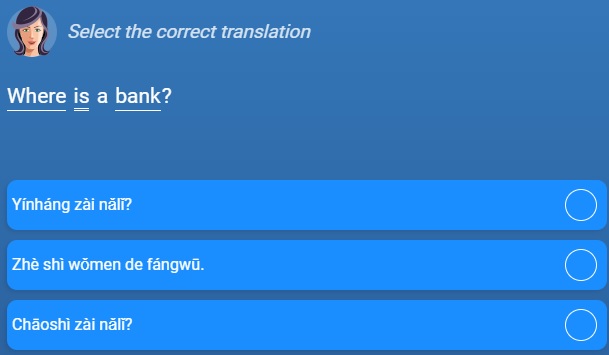 That is pretty much how Mondly works — a ton of drilling and repetition until you can’t help but remember the sentences or words taught.

Mondly certainly has a beautiful user interface, and it’s obvious a lot of work has gone into its design. It’s also smooth, easy to use, and tries as hard as possible to keep you going by rewarding you with “points” and “levels,” making it almost feel like a video game where you’re trying to level up and beat your high score. There’s even a points leaderboard to encourage you to do more and move up:

All of this makes you want to keep doing lessons, which is of course a good thing (in fact, I’d argue that simply being persistent is the best way to learn a foreign language). You may think that you have enough self-motivation to continue your language studies without what may seem like gimmicks, but my experience is just a fraction of language learners really persist with it, and the way Mondly constantly encourages you to continue is a big positive in my book.

The way Mondly lessons are structured, while perhaps being a little dull, is also very effective in drilling the important vocabulary and sentences into your head. Words are repeated over and over throughout different exercises in many different ways. If you’re learning the word for “house” for example, you’ll first be asked to move the word for house to a picture of a house, then asked to write the word for house in your target language, then perhaps asked to translate a sentence with the word house from your target language into your native language and so on. There’s a lot of repetition, but it’s all slightly varied, and it definitely makes you remember what you need to learn.

Mondly will only ever get you to a beginner/lower-intermediate level in your target language. While its constant drilling and repetition of key words and sentences will teach you the basics of a language, even after completing all the lessons for some language, you’ll still be nowhere even remotely close to what anyone would consider fluent, and you’ll struggle big-time having natural conversations with native speakers. As I’ve written about in other articles in our language learning section, to actually get comfortable speaking a foreign language you need real conversation practice with real people. That’s why I strongly recommend platforms like Italki (an excellent place for finding cheap native speakers to practice with — see my Italki review) and Preply (see my Preply review).

Beyond the main issue of Mondly being completely inadequate for actually getting you to speak a language naturally, the content of lessons between languages is also completely identical — only the words are and sentences are changed, but the pictures and questions will be the same. For example, here is the first lesson for both Japanese and Portuguese languages: 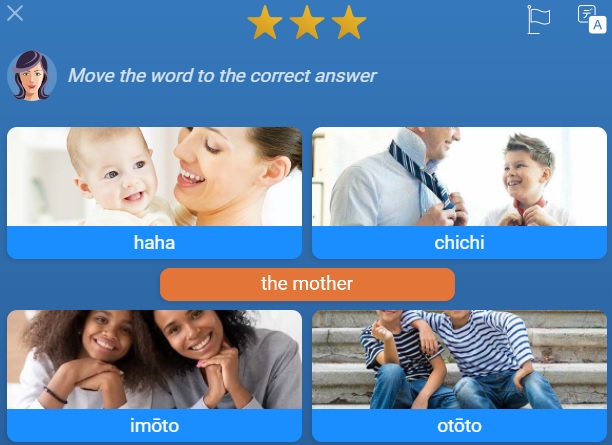 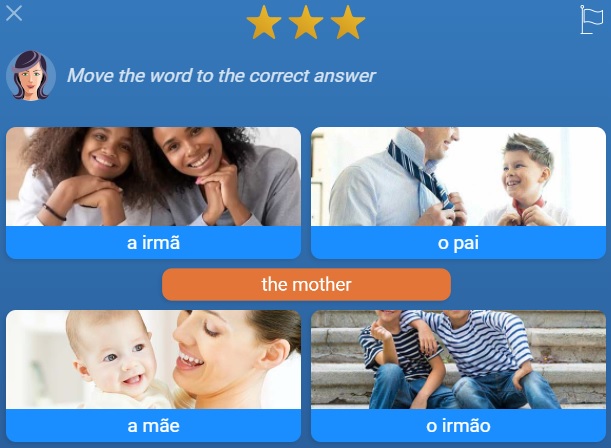 This “copy and paste” job allows Mondly to offer a lot of languages without putting much effort into each one, but means that context, scenarios and cultural items specific to a certain language will be missed. For a Chinese lesson, for example, I’d have liked to see pictures in China and pictures of Chinese people when doing a lesson on family, and then vocabulary for China-specific things or words that would be especially popular in China.

Are there any coupon or discount codes for Mondly?

None that I’m aware of. When you go to purchase the Premium version of Mondly, which is handled by 2Checkout, there is no option to enter any kind of discount code. There is a “Redeem code” option in the settings menu when you’re normally using Mondly, but I haven’t found any codes for this.

Here is how Mondly pricing is at the time of writing: 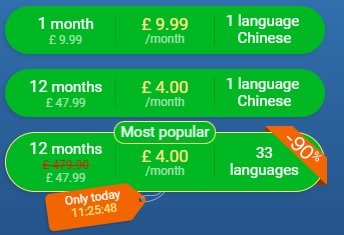 While Mondly says that 12 month deal for 33 languages at £4/month is “Only today,” this is definitely not the case, and there’s a good chance that when you read this you’ll see the same thing — even if you’re reading this months later. Mondly has in fact had this offer on for quite some time, so it’s highly disingenuous that they stick that “Only today” label on.

But anyways: to properly use Mondly to learn a language you’re serious about you’ll probably want to go for the yearly plan above at £47.99, since it will likely take you months to get through all their lessons and the monthly plan will wind up more expensive than the yearly plan once you get to the 5th month.

Can you use Mondly offline?

No, as Mondly will need to connect to its servers to show lessons, check your answers and update your progress.

What languages are available in Mondly?

Mondly’s closest competitor is Duolingo (see our compilation of Duolingo reviews where we have some great user comments on Duolingo), which we’ve also taken a deep look at. Duolingo and Mondly are very similar: they both make themselves feel like games where you want to get points and beat a high score, there’s a lot of repetition, and lessons are sorted into themes. Duolingo has the same problem as Mondly in that it’ll only take you to a basic level and no matter how much you use it, and you’ll still be woefully unequipped to have real conversations with real people in the language you’re learning. Read our compilation of Duolingo reviews for more information on Duolingo (much of what’s said there is absolutely also applicable to Mondly).

Duolingo does have a big advantage over Mondly in that it’s free with ads (you can just pay for their premium version, Duolingo Plus, if you want to get rid of the ads and be able to use it offline) and it has forums (so you can ask questions about any given lesson). Mondly’s advantages over Duolingo is that you can have a base language other than English, you get daily lessons to motivate you, and their conversation practice and AR features are above what Duolingo offers.

Other competitors to Mondly (though they’re not as similar to it as Duolingo) are Rosetta Stone and Babbel.

Try Mondly if you’re brand new to a foreign language and want to learn some words and phrases. But as soon as you’ve reached a basic level, you’d better get out of your comfort zone and try practicing real conversations with real people, else you’ll never actually learn to speak the language.