The following is my brutally honest Hostgator review. Hostgator, once a popular and great host that I used to love, has fallen by the wayside and I can no longer recommend them – and it pains me to say that. I have been a Hostgator customer since 2007, when I was first learning internet marketing. Back then, their support was fantastic – you could ask them anything and they would take great care to help you, their prices were reasonable, I never had any issues with downtime, and they were extremely easy to use. But in the years since, things changed, and now I consider Hostgator a well below average hosting company that should be avoided.

So what’s the issue with Hostgator now?

Hostgator is no longer the same company it once was. Hostgator was sold in 2012 to a company called EIG, or Endurance International Group, who has since ran it into the ground. This is a large conglomerate that brought out a lot of hosting companies. And when EIG took control of Hostgator, they did the following:

The business model of EIG appears to be this: buy popular hosting companies, cut all costs possible (including for support staff and good servers), ruin the service, and spend that money on advertising and high affiliate payouts to lure in more customers who aren’t aware that the quality of the hosting company has now been destroyed.

See this article for more information:

As Full As Possible List of EIG Companies and Brands With Details (Beware EIG Hosting!)

A rundown of some Hostgator issues, based on my personal experience

First issue: terrible support and downtime. If you are a Hostgator customer now with a website that gets any reasonable traffic whatsoever, there is a higher chance that they will take your website down and leave it down for a long time. This is what happened to me and has happened to many others. And when they do, support may take days to get back to you! In fact, I had to wait FOUR DAYS for support to even reply to my email, all the while my website was down. I was astonished when this happened to me as no other hosting company would be this incompetent.

Here is the initial email Hostgator sent me informing me that they have taken down a website I owned due to high usage:

This was on Hostgator’s managed WordPress hosting, on a plan that advertises 500k visitors per month. The site they disabled here was only getting a few thousand visitors that day, and was a dead-simple WordPress site with no images – so I was a bit surprised by this. But in any case, I replied and Hostgator sent me login details for the now-disabled website for me to make changes that might help with the load. They also suggested what they thought the issue was (high Google crawls): 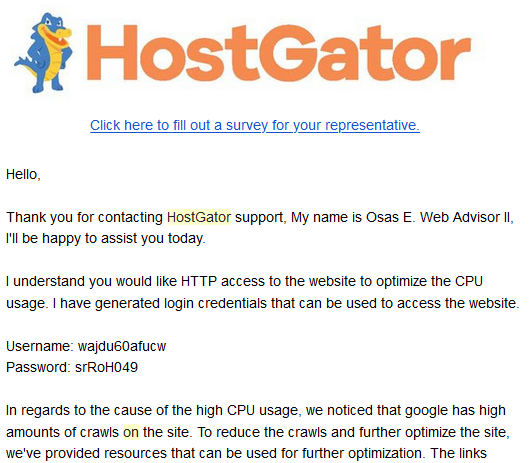 I logged into the site and made changes, and quickly emailed Hostgator back with the changes made and requesting them to reactivate the site. But here’s the issue: not only did they not reactivate the site, they didn’t even reply back. For days: 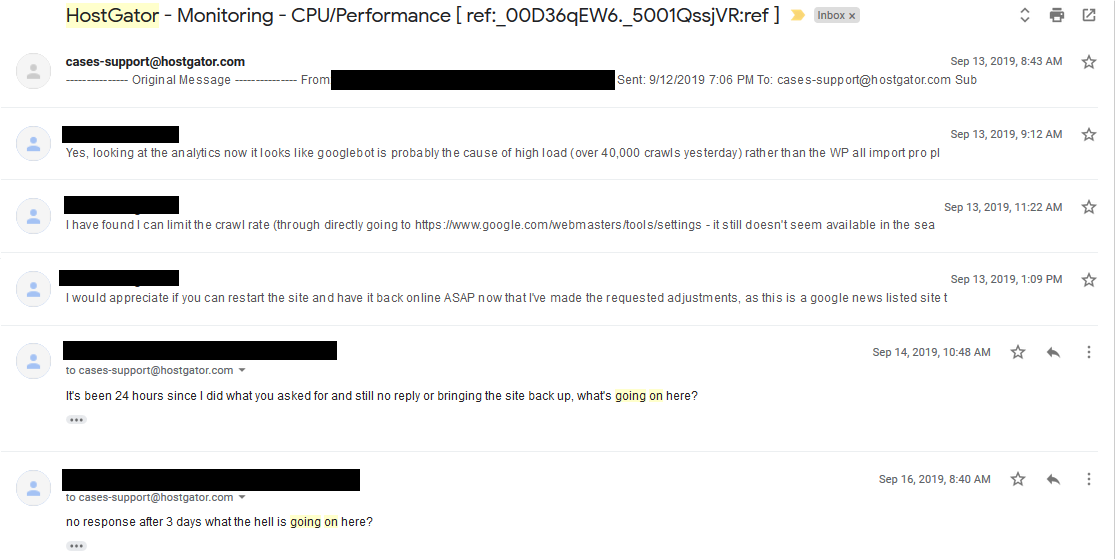 And unfortunately, that isn’t the only experience I have with Hostgator support taking days to reply. When you sign up to a new hosting package, they advertise free migrations, so I requested for them to do that when I signed up to their managed WordPress hosting. I wasted well over a week before they even looked at the migration ticket (by then I had migrated my websites myself). Only well after a week of requesting my sites to be migrated, as they advertise they’ll do for free, did someone apparently look at the ticket and contact me:

Again, this is unacceptable and pathetic for any reasonable hosting company.

So if you need Hostgator support to do anything, beware – you may be left waiting for days, even if the issue is severe (your website not loading because they took it down). This was absolutely not the case before EIG brought them out!

If Hostgator is so poor now, why do people still use it? And why are other reviews positive?

You may be confused by how negative this review is given the popularity of Hostgator, and given that there are still people who strongly recommend it. The reason people recommend it now is simple: affiliate commissions. As mentioned above, EIG’s model is to cut back on costs that would normally be spent on support in order to attract affiliates to promote it. You can see their affiliate program details here. I agree with this article criticizing most hosting review sites that only aim to earn affiliate commissions — a plethora of sites all over the web are all-too-happy to recommend Hostgator over other competent hosts that actually reply to support tickets in a timely manner (ie. almost every non-EIG host) because they offer the juiciest affiliate commissions.

If you go to hosting forums or a site like reddit.com, you’ll see actual feedback about hosts from actual users, rather than fake affiliate marketing nonsense you’ll get from searching ‘hostgator review’ in Google. The following threads on Reddit, for example, give far more insight into why Hostgator is an issue than dodgy websites trying to make money selling Hostgator to you (these are just a few I picked off the list – there are plenty more):

Before you go HostGator… from Entrepreneur

Is hostgator that bad? from webhosting

Any strong opinions on HostGator? from webdev

It pains me that so many newcomers to internet marketing and hosting will sign up with Hostgator after reading fake positive reviews for them on Google. I can only hope to put a bit of a dent in that.

Hostgator still works most of the time, so it would not be fair to give it a 1 star review. I feel 2 stars is about what it deserves given its numerous issues. We strongly recommend you avoid Hostgator when there are literally hundreds of better hosts out there (just make sure to use one not owned by EIG!).

Thanks for reading our Hostgator review. If you disagree with the above or want to share your own experience, go ahead and comment below.

What can you use instead of Hostgator?

Almost any non-EIG host will be a better choice than Hostgator. A few reputable hosts we’ve covered here and published user reviews of are Namecheap, SiteGround and WP Engine. These are not perfect, but provide a good service overall and will be a positive experience for most people.