Digital Surge is an Australian owned and operated cryptocurrency exchange that first launched 2 years ago, but only recently (around the start of 2021) launched its new platform (Digital Surge 2.0). Here I’ll write a review of Digital Surge, advise on how you should use it, and give my honest opinion of whether you should sign up to them. Keep reading or click here to skip to my verdict.

Why listen to me? As an Australian who has traded crypto on and off for years, I have a fair bit of experience testing different Australian exchanges. Beyond my favorite cryptocurrency exchange Independent Reserve (see my Independent Reserve review) where I’ve traded hundreds of thousands of dollars worth of crypto, I’ve also tested CoinSpot (see my CoinSpot review), CoinJar (see my CoinJar review) and the not-at-all-recommended Cointree (see my CoinTree review). Lately, I’ve also tried Bitaroo (see my Bitaroo review) and Swyftx (see my Swyftx review — Swyftx is the closest exchange to Digital Surge, as I’ll explain below).

Signing up to Digital Surge

Digital Surge has a very simple and easy signup process: 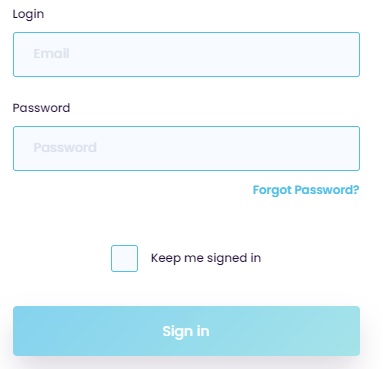 Then you’ll need to verify a phone number: 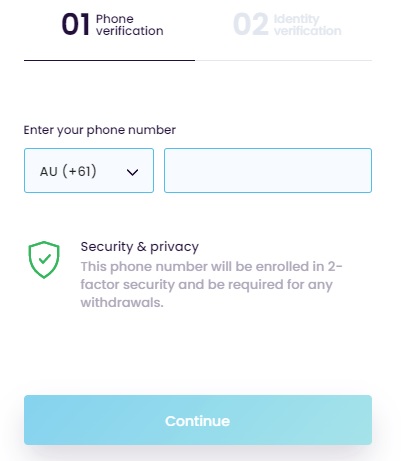 For identity verification, you have to send a selfie or record an actual video of yourself turning your head and smiling (maybe a slight annoyance, but Know Your Customer laws or KYC require things like this). Digital Surge doesn’t use Digital iD from Australia Post like some other AU cryptocurrency exchanges.

Depositing on Digital Surge works the same as other exchanges. For depositing AUD, it can be done by PayID (instant) or a normal POLI/bank transfer. I transferred via POLI ($500 AUD to test the exchange for the purpose of this review), and it was processed the next morning with a $3.30 fee (PayID is free): 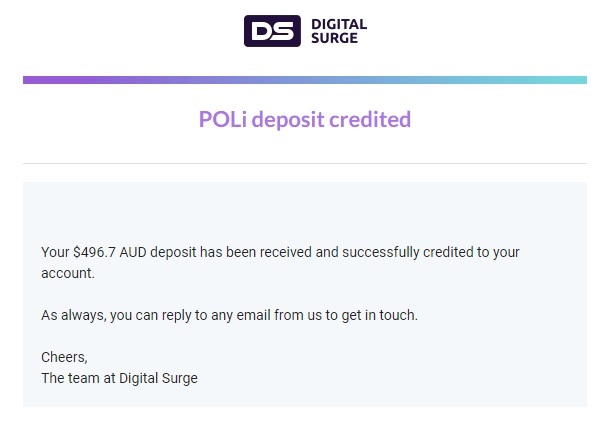 You can also of course deposit cryptocurrency: 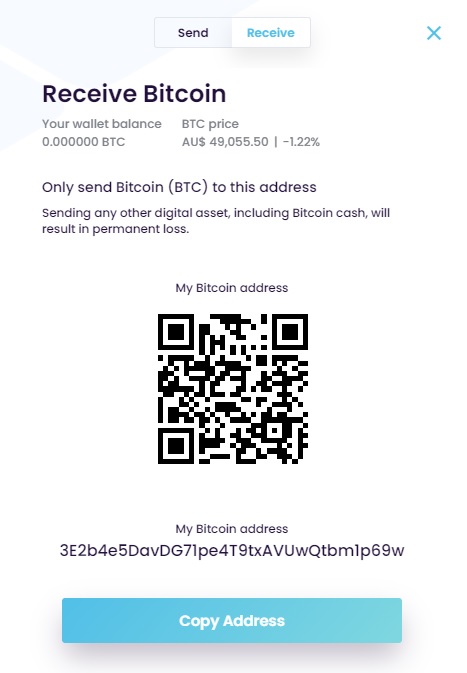 Trading on Digital Surge – how does it work?

There are 2 ways to trade on Digital Surge. Like many other exchanges, Digital Surge has both a “Markets” screen (where you can trade Bitcoin or Ethereum with other users of Digital Surge), and a “Buy & Sell” screen (where you directly buy cryptocurrency from Digital Surge, and directly sell cryptocurrency to Digital Surge). I’ve consistently warned of how using any kind of instant buy or sell feature on any exchange usually results in you getting ripped off (see my CoinJar review, CoinSpot review, Cointree review and Bitaroo review), since their fees are always vastly higher than trading on a real market (CoinSpot, for example, charges a 1% fee for using their instant buy and sell screen, compared to only a 0.1% fee for trading through their market, while Cointree gives you terrible prices whether you’re buying or selling).

But Digital Surge is a little different to other exchanges I’ve tested. For one, its trading fees are 0.5% for both their instant Buy & Sell screen, and their Markets screen (if you’re trading under $100K AUD worth of crypto over a 30 day period):

So should you trade on Digital Surge’s Markets screen, or their Buy & Sell screen? If the trading fees are the same, the key factors are 1) how much volume is traded on Digital Surge’s market (since the more volume is traded there, the easier it is to trade and the better prices you’ll get) and 2) what the spreads are like (i.e. the difference between buyer bids and seller asks — the higher the volume, the smaller the spread should be, which is a good thing).

I asked Digital Surge about how much volume is traded on their market and how their exchange works, and had this conversation with one of the co-founders (Josh): 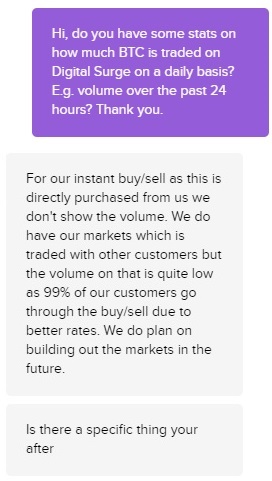 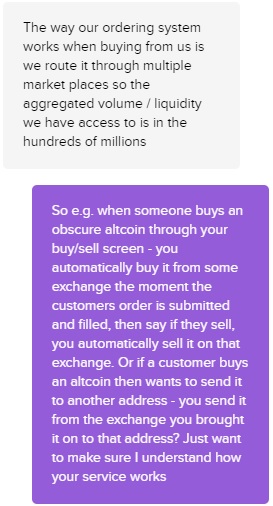 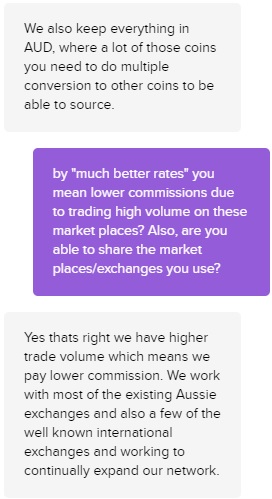 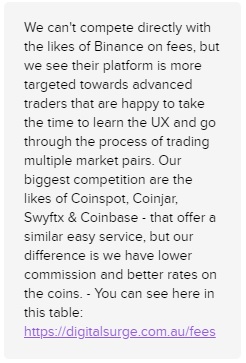 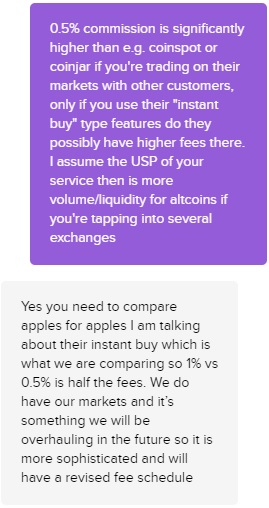 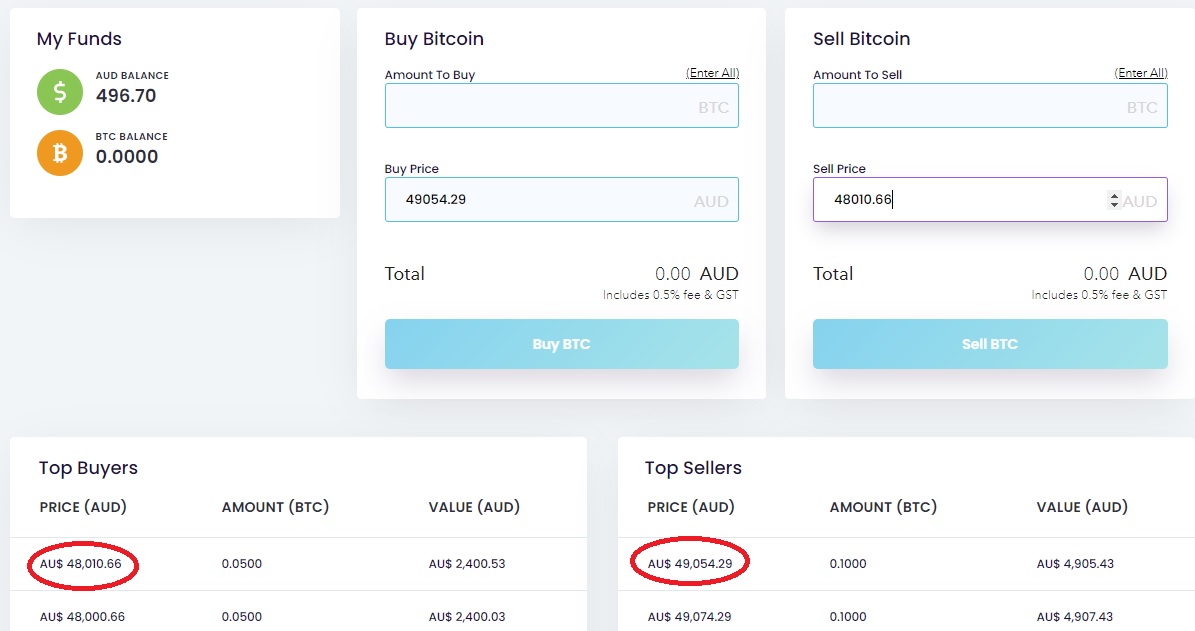 The volume is too low and the spreads are too high here, so avoid Digital Surge’s Markets screen — trade through the Buy & Sell screen instead. Digital Surge’s “Buy & Sell” screen not only allows you to buy and sell all kinds of cryptocurrencies (the Markets screen above only allows you to trade Bitcoin and Ethereum), but it has much lower spreads than this. Here’s an example spread for buying vs selling on the Buy & Sell screen:

A spread of a little less than $300 AUD per Bitcoin at the time this was taken (though this will vary a lot), which is acceptable.

Speaking of spreads, Digital Surge lists this comparison of spreads across different exchanges (“calculated and averaged across 5 different coins that some of the local exchanges have” — see here):

However, when it comes to the major cryptocurrencies, Independent Reserve has smaller spreads than Digital Surge. Here’s an example for Bitcoin taken at the time of writing:

That’s a spread of less than $100, vs a spread of $300 on Digital Surge when I checked (again, these spreads will change a lot).

Independent Reserve, being an exchange where users trade with each other, just doesn’t have the volume on these smaller cryptocurrencies compared to Digital Surge which has access to many different market places (and of course more volume = lower spreads). Though Independent Reserve still has the advantage of being an exchange where you can place limit orders (thus potentially getting better prices if you buy on the bid and sell on the ask), while with Digital Surge you’re forced to buy on the sellers ask and sell on the bidders’ bid.

As far as fees, Digital Surge’s 0.5% fee for trades is the same as Independent Reserve, and significantly higher than CoinJar and CoinSpot if you’re trading on their exchanges (CoinJar and CoinSpot only have higher fees if you’re using their instant buy and sell features, which as I explain in my reviews of them are not recommended — if you trade on their exchanges the fees are between 0 and 0.3%).

A small point, but Digital Surge’s website is the most aesthetic I’ve ever seen for cryptocurrency exchanges. Whoever their web developer is knows their craft.

Digital Surge has live chat, and when I asked a question I got a thorough reply almost immediately (from one of the co-founders no less).

Digital Surge currently has 229 coins available to trade on the Buy & Sell screen, far more than the average Australian cryptocurrency exchange. I consider the vast majority of these to be trash, but there can be opportunities to make money trading them if you’re smart. Also, as mentioned above, for altcoins Digital Surge has that happen to be on exchanges like Independent Reserve, their spreads are better.

If you’re looking to trade high volumes of Bitcoin or Ethereum on an actual marketplace (where you’re buying and selling with other traders), Digital Surge isn’t the exchange for you, since its Markets screen has very low volume. You can only really use their Buy & Sell screen, and for trading the big cryptocurrencies (Bitcoin and Ethereum specifically) there are better options where you’ll either pay lower fees (as with CoinJar or CoinSpot) or probably get significantly lower spreads (Independent Reserve in particular, due to its very high trading volume, seems to have much lower spreads for Bitcoin).

I strongly recommend using Digital Surge if you plan on trading altcoins and smaller cryptocurrencies. The only other exchanges that have as many altcoins (over 200) are CoinSpot where you’ll be paying a 1% trading fee on them (since most are only available on their instant buy/sell screen), and Swyftx which has a slightly higher trading fee (0.6% vs 0.5%) (though Swyftx is a very worthy competitor — so it’s either Swyftx or Digital Surge for trading altcoins in Australia, and everything else is quite far behind). You can read my Swyftx review here.

However, if you want to trade a lot of Bitcoin, Digital Surge is not the best exchange to do that on as mentioned just above.

You may also sign up to other Australian cryptocurrency exchanges through my referral links here:

Finally: Do you have to use an Australian-based crypto exchange if you're Australian?

It's worth mentioning that as an Australian, you're not limited only to Australian-based crypto exchanges. In addition to the above, I also recommend signing up to Binance (see my Binance review), the biggest exchange in the world right now. You can sign up and use them as an Australian and buy crypto with AUD with no issues. I've been a Binance user for a while and enjoy a lot of their features, especially the ability to earn passive interest on crypto and stablecoins. Binance has heaps of features that no Australian exchange offers, so you should definitely sign up to them.

Also, in addition to Binance, check out Bittrex, Bitstamp and Poloniex (all these exchanges allow Australian users). These are my personal referral links which can sometimes get you perks if you sign up through them (e.g. if you sign up to Poloniex using my Referral Code RKLBN4YZ, you'll also get a 10% rebate on trading fees).