Used Blynk? Submit your own review

Welcome to our comprehensive Blink FAQ, designed for people who just heard about Blynk and want to know more about it. 🙂

First off: what is Blynk? In short, Blynk is an “Internet of Things” (IoT) platform that allows you to build your own apps to control certain devices over the internet. Blynk started off as a Kickstarter campaign in 2015, where it raised a total of 2,321 backers and raised $49,235 on a goal of just $10,000 (see the Kickstarter project here). Since then, the company has gained in popularity year-after-year. Here’s what Google Trends shows for Blynk search volume over the past 5 years in the USA:

Blynk may not be a household name just yet, but more and more people are hearing about it every day, and we believe this innovative company is just the beginning of what will be a huge IoT industry.

What is Blynk used for? Who uses it? And how do you use it?

Let’s go through these. The first group (hobbyists) may own a device like a Raspberry Pi (basically a small single-board computer that you can tinker with) and want to build an app with Blynk to make their Raspberry Pi do something that can be controlled from your phone (the simplest example is lighting up an LED light on the Raspberry Pi with the tap of your finger on your phone, but you can do much more than that). Here’s how you get started with Blynk:

Roboindia gives a pretty good example tutorial on how to build the simplest possible Blynk app, namely one that lights up a light on your Raspberry Pi when you tap a button on your phone. Here’s what the final result looks like: 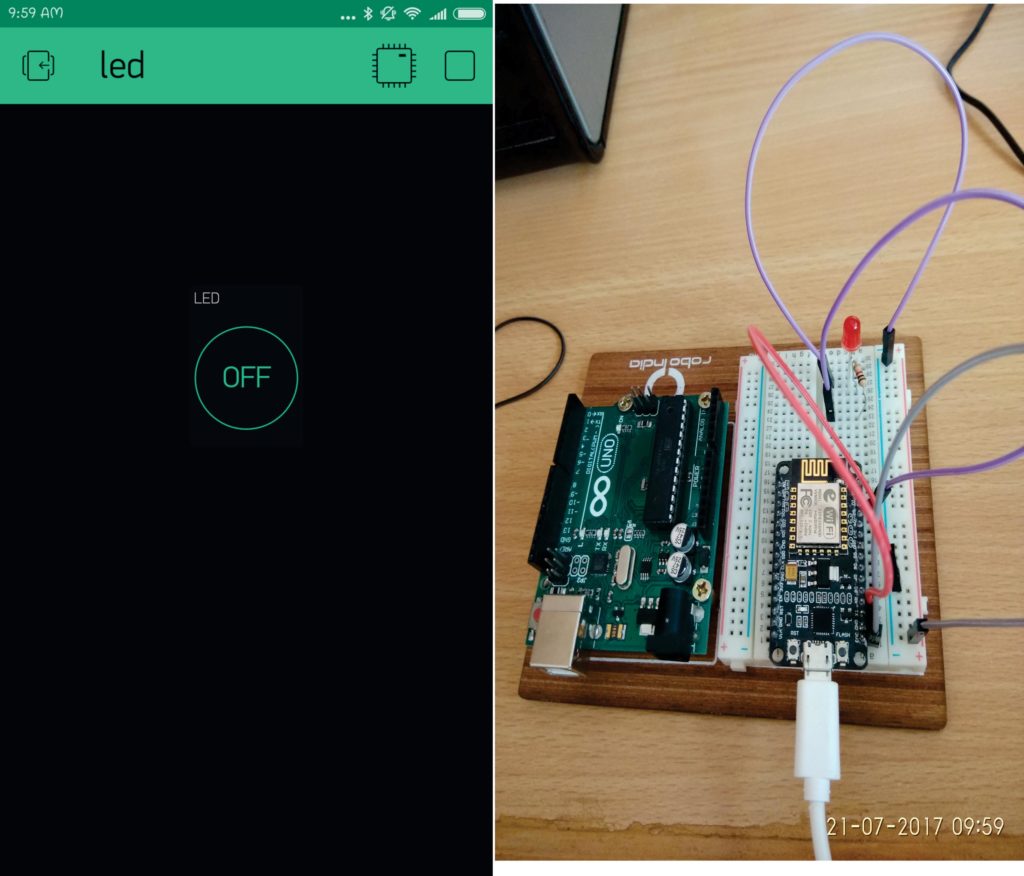 But Blynk can do much more than turn on a light. The second type of user group are people who want to do more than just experiment – they want to make something with Blynk that will actually help make their life better, and there are actually plenty of ways you can use Blynk for that. One example is building a smart home for yourself (see All About Circuit’s example, for example). You could build an app with Blynk that could notify you if your movement sensor detects movement, if your water tank level dips below a certain level, if a window or door is opened or if the alarm sounds.

The third user group of Blynk is companies. If you’re building a useful Blynk app like a smart home app, the key point is that only you can use it. You cannot make it a commercial app and distribute it to other people. If you’d like to do that, you have to pay Blynk a yearly fee, so certain companies (Blynk says they have worked with over 500 companies at the time of writing on their clients page) will have a Blynk app developed for their product(s) that’s useful to their customers, and pay Blynk to be able to offer the app to their customers.

So what’s our Blynk review – is it worth using? What’s its cost?

For individuals: Blynk has clearly established itself as the leading player for building IoT apps, so yes – if you’re interested in this area and have a compatible device you should absolutely download the app and give it a whirl. However, to enjoy it you should be reasonably technically literate and realize that building an actually useful app with Blynk will take many hours. Also, while the app’s free to download, if you’re going to be building a relatively complicated app with many widgets you’ll have to pay a little money. You start off with 2,000 “energy” and each widget you add will use some of your energy points. Here’s what energy points cost, if you need them:

There are no monthly subscriptions or anything annoying like that with the Blynk app, and the above prices are very reasonable, so as an individual the cost to you will be little if anything. So we have no reservations at all about recommending that you try it out and start tinkering. Also, the vast majority of reviews on the App Store, Google Play store and Capterra are very positive.

For companies: Blynk’s plans for companies start at $1,990/year, and as you’d expect, we haven’t signed up to anything like that. We therefore can’t comment on the service Blynk provides to businesses.

What are some examples of cool Blynk projects?

We’ve mentioned the projects of turning on a light on your Raspberry Pi (the ‘hello world’ project of Blynk) and building a smart home setup, if you’re feeling adventurous. But there are actually loads of cool apps you could build with Blynk, limited only by your imagination (and hardware, of course). Here are some Blynk example projects:

Where can I find Blynk tutorials?

There is a great community for Blynk at https://community.blynk.cc who are happy to answer development questions if you’re confused (just read the documentation first); there is also a tutorials playlist on the official Blynk YouTube account. Currently, there are also a few cheap paid courses on Blynk development, such as one on how to make a robot car.

Are there any good Blynk alternatives?

Many big tech companies are trying to establish a foothold in the IoT industry. There is AWS IoT, Google Cloud IoT Core and IBM Watson IoT Platform, though we have not tried them ourselves as of now. Perhaps the closest product to Blynk is Cayenne who can perform many of the functions of Blynk (a good rundown of the differences between Blynk vs Cayenne is here).

What are some boards, shields and connections are currently compatible with Blynk?

Taken from the blynk.io website, the following boards are compatible with Blynk:

If you’ve read this far, we recommend trying Blynk out – it’s a lot of fun and a great product. Also, if you have any comments, questions or feedback on this Blynk article, please comment below.

User comments we received on Blynk

Here are the submissions we’ve received on Blynk, from people who have tried it (just 1 so far) – please make a submission if you’ve used Blynk and we’ll add it here.